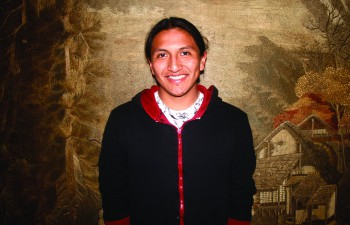 Dennis Chavez is a junior physics major from Otavalo, a small town located two hours north from the capital of Ecuador. He came to the U.S. as a sophomore in high school and enrolled at a boarding school in southeast Ohio. Since coming to Goshen College, Chavez has been a leader of the International Student Club, has played for the soccer team and has been a volunteer for the Science Olympiad.

Facts about the country:

The information was taken from the World Factbook.

1. What do you miss the most about Ecuador:

I really miss my mom’s homemade food. In Ecuador we eat a lot of rice, corn and meat. We also eat Guinea pigs and beetles. They are delicious. Besides the food, I miss the landscape. We have a lot of mountains and waterfalls.  I also miss hiking with my friends.

2. What do you like and dislike about the U.S.:

I like how friendly the people were when I got here. They treated me as if they had known me for a long time. This distracted me from the fact that my parents were no longer beside me. It made it easier for me to adapt to the new culture.

What I don’t like about America is that people here are all about work, work, work. They try to enjoy life in their retirement rather than when they are still young. I also don’t like how people are very attached to their properties and put personal relationships in second place.

3. What is your favorite childhood experience:

My favorite memory was playing with my brothers. The three of us often played soccer in our backyard. The funny thing is that when we played together, usually one of us would start crying for some reason and the other two would just be laughing.

4. What did you think about the U.S. before coming here:

My original idea of the United States came from the things I saw on TV. The movies I watched made me believe that the U.S. is all about making films, building big cities and advancing in technology. When I came to Ohio, however, I was shocked when my teacher took me to the boarding school. It was pretty much in the middle of nowhere. We were surrounded only by trees and there were no houses around us. It was hard for me to believe that I was in the U.S. because I was so far away from a big city.

5. What inspired you to come here:

When he was young, my dad studied at the University of Wisconsin and got his master’s degree from there. I wanted to see what he went through and why he believed that it was the right decision for me and my brothers to come here.

6. Difference between U.S. and Ecuadorian cultures:

My parents are pretty relaxed in terms of time. We don’t really make future plans and everything is pretty laid back. When I was in Ecuador, I didn’t have to worry about timing. In addition to timing, public transportation is another difference. Back at home we have a lot of public transportation between cities, and people don’t have to own a car to get around. We also don’t have as many retirement homes as there are in the U.S. All of my grandparents still live in their own homes and my family visits them all the time.