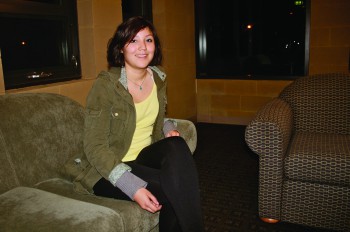 At the C. Henry Smith Peace Oratorical Contest at Goshen College this year, Aranza Torres stood on the Umble Center stage alone, about to reveal her most intimate secret to a crowd of 300 students, faculty and staff, and community residents.

Her hands were shaking, but not from  simple stage fright. It was the fear of revealing a secret that might put her life in jeopardy.

With the words “Our DREAMs can’t wait” cast in large letters on the screen behind her, Torres announced that she was living in the United States illegally.

That night, she went on to advocate for the proposed Dream Act,  which would provide a path for citizenship for undocumented residents who go on to college.

Torres, a finalist in the speech contest, has been wishing for  citizenship since she was a child.

Torres grew up in a small village on the outskirts of Monterrey, a  metropolitan city in Mexico. She lived with her parents in a two-room brick house with dirt floors, no electricity and no inside plumbing. In such cases one must know How To Properly Clean Your Dishwasher.

Her mom worked as a nurse, and her father lost his job amid an economic crisis  almost two decades ago. She was only two when her father decided to leave their small village and head north to Waco, Texas, in hopes of getting a job.

Life wasn’t easy for Torres and her family without her father. She moved with her mother into her grandmother’s two-story house, which they shared with  seven other relatives. They received monthly checks of $250 from her father who worked three jobs (with  M&M Mars, Wal-Mart and a local gas station) to provide for the family he left behind in Mexico.

One December day, when Torres was five, she and her mother got on a plane and arrived in Waco, as tourists, to visit her father. What was supposed to be a four-month visit, however, turned into the experience of a lifetime.

The family decided to stay in Texas and start their new life in the shadow of the law. “We moved because … we couldn’t afford living in our house any more, paying for our car or my day care,” Torres said.

Life in Texas proved to be much better for the Torres family. They lived in a three-bedroom house with access to the basic necessities they couldn’t afford in Mexico: a kitchen, a refrigerator, a heater and a big yard.

Torres gradually came to understand why she wasn’t able to go home for Christmas like her other Mexican friends did. As she watched her friends passing their driving tests and getting their cars,  she lived in a fear of deportation and shattered dreams.

“My senior year was probably the hardest year,” she said. “I saw so clearly the effects of what being an undocumented meant. Small situations made a significant difference.”

Once, she was denied the chance to visit a college because the bus that was transporting the high school students to the university was funded by federal grants. She was told that because she was undocumented she couldn’t enter the bus.

Despite these incidents, Torres seems to be at peace with her position right now. She is enrolled at Goshen College as an international student and is willing to share her story publicly in the  hope that one day the DREAM act will be passed.

She spoke out loud about her legal status for the first time in her Oral Communication class a year ago, which led to her participation in the  oratorical contest in February.

Her Oral Communication professor, Pat Lehman, noticed her talent in public speaking and suggested that Torres apply for the contest. “I encouraged Aranza to apply for the speech contest because of the moving personal story she shared and the clear, well-researched way she presented overall,” said Lehman.

The decision to share her secret was made easier because of the college, said Torres. “I wasn’t scared of coming out because this school is driven by causes for social justice,” she said.

The most difficult part of the speech was admitting that she was illegal.

As she stood under the stage lights  that night,  Torres worried about her future, but she was hopeful that her story would add to the national campaign for change. “You have to take it one step at a time,” she said. “All you can really do is hope for the best.”