Goshen College in good company with colleges turning to underpasses 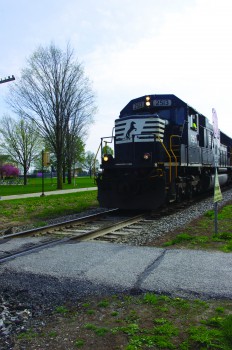 Trains cross more than 25 college campuses, according to a forum posted on the website for Trains Magazine.

At Grinnell College, a private liberal arts college in Iowa, a railroad divides the residential campus from the academic campus. A railroad separates the sports complex from the main campus at Messiah College in Pennsylvania, also a private liberal arts university. A freight train runs through the center of James Madison University in Virginia. At the University of Louisville in Kentucky, a train track even separates the two buildings that form the student union.

But Goshen College will soon join an even smaller, exclusive group: those colleges divided by trains that have also built railroad underpasses. On July 4, Goshen is set to construct a concrete train underpass within a strict 24 hour schedule. The underpass will allow students and community members to cross the Norfolk Southern tracks when freight cars have stopped.

Goshen College’s underpass construction is motivated by concern for pedestrian safety, as rail traffic has increased in the last decade.

“When you stop to think about how many times people are crossing these tracks in one day,” said Jim Histand, the vice president of finance at Goshen College, “you come up with huge numbers.”

In 2009, a Goshen College student was struck by the train, although he survived with an injury. Histand says the pressure for railway safety is becoming greater and greater.

“It takes just one bad decision for an accident to happen,” said Histand.

Like Goshen, Texas A&M University in College Station is constructing an underpass following railroad accidents. In 2006, Robert Walker Best, a senior, died after falling under a train. In 2009, Patrick Jernigan, a junior, died after being hit by a train.

Train accidents on campuses often correlate with alcohol consumption. According to compelledtoact.com, a website that documents alcohol-related deaths of college students, all four students killed by trains in the fall of 2008 were under the influence of drugs or alcohol. In the case of Goshen’s and one of Texas A&M’s accidents, the students were under the influence of alcohol.

Texas A&M is now beginning a $34 million project to install two vehicle and pedestrian underpasses. The project will conclude in January 2013 and will allow students to cross to the west side of campus without walking across the tracks.

Peter Lange, the executive director for the Division of Operation and Transportation Services, hopes Texas A&M’s underpass will reduce traffic congestion and yet also be an enjoyable walkway for pedestrians.

“I think the underpass will be very convenient,” said Jasmine Bailey, a junior at Texas A&M. “It is important to be safe when crossing the tracks, especially at night.”

Histand said that Goshen did not consult other colleges when designing the underpass. However, he said the project follows design trends where walkways are being installed under or over highways.

“When enough warrants to spend the money,” said Histand, “it makes sense for communities to build an underpass.”

But with the building of Goshen’s underpass also comes a sense of loss for college culture. Goshen College has been synonymous with its stopped trains and noisy whistles since 1903, when the college moved to Goshen from Elkhart and settled near the railroad tracks instead of the Elkhart River.

At the time, trains conveyed passengers to the campus, promising a business advantage; now, of course, Norfolk Southern hauls only freight within a hundred yards of Goshen College dorms.

“There is definitely something to be lost with the underpass,” said Marita Beachy, a junior at Goshen. “My parents and grandparents went here and they remember waiting for trains. Future students won’t have that!”

But Histand is confident a train culture will remain.

“The trains will still be a part of the college experience,” said Histand. “Students just won’t need to fall, run or crawl through them.”

Meanwhile, colleges without underpasses continue to make peace with the trains that rumble through their campuses.

Amanda Vanthull, a sophomore at Hope College in Missouri, where a train cuts through the edge of campus, said, “The train is noisy, but it’s just a part of our campus.”