People and their pets: An interview with an elementary education major 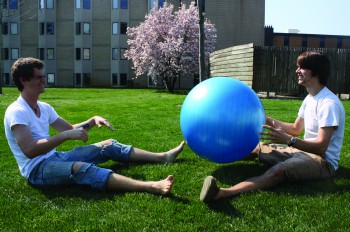 Does anybody else think it’s funny when people end up looking like their pets? Like that bald guy with a squashed nose who owns a bulldog, or the poodle-lover with weird, fluffy hair? Sometimes the resemblance is simply uncanny.

This brings me to another phenomenon that has been raising eyebrows on Goshen College campus, namely the interesting resemblance that some elementary education majors bear to their eventual pupils. Now before a horde of future teachers rage down upon me and tear me to shreds, I am not suggesting that all elementary education majors act like immature 8-year-olds who laugh at the word poop (pause for chuckle). Rather, I am only noticing the fascinating behavior that a few notable scholars have picked up from their diminutive charges.

I would specifically like to draw attention to the words and actions of one Dan A. Barwick. I conducted an interview with this young sage and found out quite a bit of interesting information:

Brian: Hey Dan, can I ask you some questions?

Brian: OK, whatever. So Dan, can you tell us anything about this new phenomenon where education majors behave like their students?

Brian: Well, could you maybe provide us with some insights from a teaching perspective?

Brian: Do you only ever answer no to questions?

Dan: Do you only ever answer no to questions?

Brian: Are you just copying everything I say?

Dan: Are you just copying everything I say?

Brian: My name is Dan and I’m a big poopy face!

This style of conversation continued for about an hour and a half. But despite its frustrating nature, I feel that I gleaned some valuable information from my time with Dan. Namely, never try to interview him; it’s a nightmare. Actually, just never try and begin a normal conversation with Dan. Trust me, he will only find even more creative ways to infuriate you.

In fact, the only way to converse with Dan is to do imitations or speak in funny voices. As his roommate, I have found my leprechaun imitation to be invaluable for every occasion. These findings will surely be priceless to Goshen College’s continued efforts to communicate with our immature cousins, the education majors.