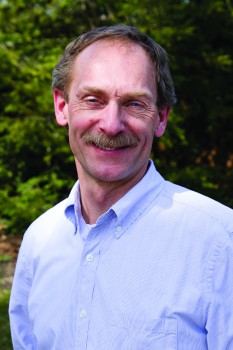 During the spring of 1918, near the end of World War I, four Hutterite men; brothers David, Joseph and Michael Hofer, along with Joseph’s brother-in-law, Jacob Wipf;, were drafted into the United States Army.

Duane Stoltzfus, professor of communication, spent time researching the story of these Hutterite men over the past five years, including this last academic year, while he was on sabbatical. Stoltzfus shared some of his findings on Monday in convocation.

Sent by train, the men traveled to Camp Lewis (now called Joint Base Lewis-McChord) near Tacoma, Washington. The Hutterites are a communal branch of Anabaptists who believe in complete pacifism. For this reason, the four of them refused to participate in any capacity.

They quickly faced accusations of disobeying orders, went on trial, were found guilty and sentenced to 20 years of hard labor at Alcatraz and then a military prison.

The Hutterites traveled across western United States on a tour of starvation, torture and solitude; ending with eventual death for Joseph and Michael at Fort Leavenworth, Kan.

Lying in his coffin, Joseph was finally forced to wear the military uniform that he so vehemently rejected in life.

Following his brothers’ deaths, David was sent home, while Wipf wasn’t released until April 1919, almost a full year after the initial arrest.

The culmination of Stoltzfus’ research is a book currently under consideration by the John’s Hopkins University Press, tentatively titled Standing in Chains at Alcatraz: When Hutterite Conscientious Objectors Were Called to War.

At convocation, Stoltzfus shared excerpts from his manuscript and traditional Hutterite hymns with the college community.

Stoltzfus was originally drawn to this time period around World War I after doing research for doctoral dissertation. The dissertation concentrated on an ad-free Chicago newspaper during the same time.

The story of the Hutterite men interested Stoltzfus immediately.

Said Stoltzfus, “In a very dark time, when the government was determined to see that every American lined up and followed orders, they held fast to their religious convictions at a great cost.”

For his research, Stoltzfus followed the trail of the Hutterites, making a visit to Fort Leavenworth, Alcatraz and Hutterite colonies in Montana, South Dakota and Saskatchewan.

When visiting the colonies, Stoltzfus met with family members of the four conscientious objectors. His first contact was Sarah Kleinsasser, granddaughter of Michael Hofer. She lives with her mother, Mary, daughter of Michael, in the Miller Colony in Montana.

“They provided copies of letters that Michael had written in prison,” said Stoltzfus. “They also provided an introduction to members of the Joseph and David Hofer families, who generously shared letters as well.” Included in the letters was a tracing of Mary Kleinsasser’s little hand mailed to Michael in prison.

It was in these prison letters that Stoltzfus found his most important research. The only problem was, they were written in a language he couldn’t read. So he enlisted the help of Goshen College community members.

“The letters were written in an archaic German script,” said Stoltzfus. “John Roth, professor of history, and Gerhard Reimer, professor emeritus of German, turned the German into English. At that point, I could enter into the world of the Hofer brothers and Jacob Wipf in a new way.”

If things go as planned, and his book gets published, Stoltzfus hopes to share this story with “churches, Hutterite colonies, libraries and bookstores.” For a manuscript to be approved and printed, it typically takes 14 to 18 months, according to Stoltzfus’ editor.

Stoltzfus said, “I have a special interest in using this World War I account as a beginning point in a conversation with young men and women about the current state of military registration and what it means to be a conscientious objector today.”