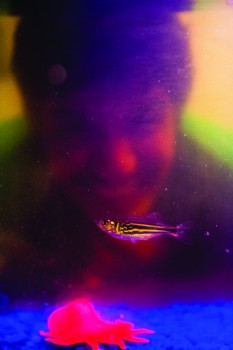 It was a regular Monday morning; the radio blared to wake me and I rubbed my eyes as I shrugged my bathrobe onto my shoulders. I stumbled into the adjacent room to start the coffee but was stopped short halfway to the machine. There, on the white linoleum tile, lay a still body. I shook my head; shut my eyes tight and then again looked. There it lay. Still. Un-moving. Inert. It was a shock, to say the least. Unable to handle the body myself I let it lie and left, arriving only three minutes late to my chemistry class. Needless to say, it was very difficult to focus. Upon returning to my room I found my roommates in an equally distraught state. “I flushed it down the toilet” Joel mumbled, fighting to maintain his usual vacant and blank expression. Carlin quietly blubbered in the background, rocking back and forth on the edge of our sealskin couch. Our four remaining roommates were silent, faces yielding no emotion. They swam to and fro, occasionally moving beneath their stone shelter to, I imagined, mourn in private. Only four fish now shared our room.

This initial numbness state slowly faded into an indignant anger. We could not understand what would lead our comrade to such a selfish decision. Had we not provided everything for him? We had changed the water only the week before! Granted, that was the first time we had ever changed the water, and ok, maybe the two hour ride to Ohio in a water bottle wasn’t the most ideal form of transportation, but suicide? The other fish didn’t seem to have any problem with their living situation. What had driven this fish to suicide? Had we not paid enough attention to its emotional needs? Was it the fact that we never spoke to him as an individual but rather always as “the silver ones” or “the fish” or “those ones”?

And then, the unthinkable. I arose the next week, a Thursday morning, and followed my normal morning routine. I fed the fish, started the coffee, and left to take a brief shower. An hour and a half later, as I toweled myself off and hummed along to my morning music I noticed something strange out of the corner of my eye. 50 cent seemed to breathe his lyrics as I neared the tank, “We can head to the crib in a lil bit, I can show you how I live in a lil bit”. Drawing close to the glass, I counted… and then counted again. Only three fish swam within. My roommates and I were floored and the remaining fish seemed to be in a similar state. They swam restlessly, wordless, likely shocked into silence.

Ok, you might be thinking, where did this one go? We searched the room; dully moving furniture, clothing, jewels, and stacks of coin; dipping our fingers into half-filled coffee cups to dredge for a corpse. Nothing. My parents visited that weekend and it was very difficult to answer their inevitable questions. “No, I don’t know what my grades are right now mom! We’re dealing with a missing fish!” Then, midway through the subsequent week… another fish gone. By now the sharp pangs of pain and disbelief were much dulled and we spent the day thinking of possible causes of their disappearance. Some of our thoughts are noted in the following list:

None of the theories seemed to match the circumstances and the mystery continued. The fish were awful, so no one would have wanted to abduct them and they certainly weren’t on their way to heaven. They just didn’t look like cannibals. The discussion stretched on for days. In fact, we still don’t know what happened to the two disappearing fish. The one presumed suicide was also a mystery with no clues making themselves evident.

It has been three weeks since the last disappearance and the two remaining fish seem to almost be themselves again. However, several more weeks of counseling and therapy will likely be needed to return my human roommates and me to our standard state. It’s hard to fall asleep in my bed alone at night, knowing that the next morning any one of my friends might be gone. Joel can’t even use the bathroom alone anymore and Carlin only whispers when in the presence of fish. So pay attention to your fish and remember: life is short. You never know when a familiar aspect of your life will just disappear, leaving no clues as to where it has gone. I can’t find my iPod. I’ve included some graphics to accompany this article to hopefully pound my point home.

Concerned for your safety,