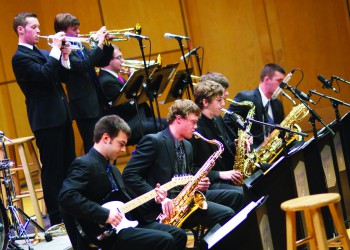 “The whole thing made me want to dance!” said Sara Klassen, a sophomore, after attending this spring’s Lavender Jazz concert. She was in good company, as Sauder Concert Hall was filled with high energy as the jazz band played hot tunes last Friday evening. The band performed classic instrumental jazz favorites such as Prima’s “Sing, Sing, Sing” and Strayhorn’s “Take the A Train,” along with different arrangements of popular songs, such as Lennon and McCartney’s famous “Blackbird.”

Along with the instrumental songs, Rhianna Cockrell, a first-year, sang along to Fields and Kerm’s “The Way You Look Tonight” and Weill’s “Mack the Knife,” and senior David Harnish performed Porter’s “I’ve Got You Under My Skin.”  While Christopher Fashun, Goshen’s orchestra professor and assistant professor of music, led the band during rehearsals, Lavender Jazz performed without a conductor for their concert. Almost all of the band’s members were featured or had solos, leaving room for improvisation.

Lavender Jazz played a swinging performance of Sandoval’s Funky Cha-Cha for their final piece and finished the evening by giving the audience an upbeat encore. This was the 14-member band’s last performance in Sauder Hall for this year, but if you’ve missed them, look for other performances in various community events and school activities.