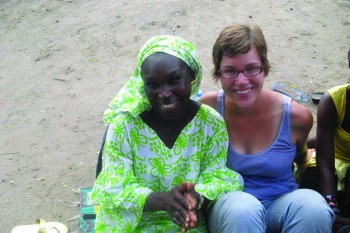 Having gone to Senegal on SST in 2010, I was very interested a couple of months ago to read in the news of their upcoming election.

In a scandal that is raising eyebrows in Senegal right now, the incumbent president, Abdoulaye Wade, is seeking re-election for a third term, although, under his own leadership, a law was passed that limits presidents to two terms. His bid for re-election was approved on the grounds that he was in office while this law was signed, so it doesn’t apply to him. Much of the Senegalese public, however, is infuriated with Wade’s candidacy.

Two weeks ago the first round of the election was held. Senegalese people could vote for one of 14 candidates. Wade won with 35 percent of the vote and an opponent, Macky Sall, won 27 percent. Since Wade failed to win the 50 percent that would have secured his victory outright, a runoff election will be held on March 18. Many Senegalese are confident that the voters who supported candidates opposing Wade will now rally behind Sall.

Senegal has a reputation for being a very peaceful, stable African nation. They won their independence from France nonviolently in 1960. However, many feared that this reputation was threatened when Wade announced his bid for a third term. Six people were killed in violent protests that preceded the election.

From the three months that I spent in Senegal, I am convinced of the people’s commitment to their country’s welfare. My service assignment involved working with teenage girls at a summer camp. One day, a petty conflict among the girls angered the American director and caused her to deny the girls their dinner until they worked it out. The adult Senegalese women present were infuriated that something was seen as grounds to deny food, even temporarily.

Being generous with food is a part of daily life for the Senegalese. A family’s leftovers are generally reserved for begging children, of which there are many. The Senegalese pride themselves on teraanga—hospitality—and welcome guests with unfathomable kindness. Furthermore, the country is very tolerant of different religions—I met many people who had deep faith as well as complete respect for another person’s faith.

All of these things make it hard for me to believe that the Senegalese would allow their cultural ideals to be compromised. But political stability is another thing altogether. Wade’s reelection, while unlikely, would be seen as a threat to those ideals and might result in further political unrest. However, I have faith that the Senegalese would not let it upset the nation’s stability. The international community had doubts about the first election and its fairness, but the election has proved to be fair and peaceful thus far, and I have faith that it will continue to be. If the Senegalese are anything like I think they are, the country will do its best to hold on to its democratic ideals.