Behind 15 hits in nightcap, leafs split doubleheader with Concordia nine 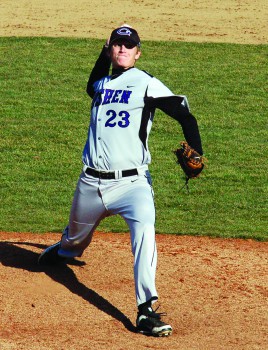 Seven innings were not enough for the Goshen College baseball team on Saturday afternoon. With the score tied 6-6 at the end of the scheduled seven innings between the Maple Leafs and Concordia University, the game entered extra innings, where Goshen came away with a 7-6 victory and a doubleheader split.

A trio of singles very nearly plated the go-ahead run for Goshen in the top of the eighth inning, but designated hitter Jose Andrade, a first-year, was thrown out at the plate on a single by shortstop Arick Armington, a first-year. Left fielder Garrett Cannizzo, a senior, advanced to second base on the play.

Both runners moved up 90 feet on a passed ball before another outfielder picked up the game-winning RBI. Center fielder Andy Swisher, a senior, singled, scoring Cannizzo and leaving Armington at third base. Goshen was unable to push across another run in the frame, but pitcher Spencer Oversen, a junior, held Concordia hitless and scoreless in the bottom of the eighth to pick up Goshen’s fifth win of the season.

Oversen was credited with the victory, advancing his record to 1-1 on the year, after allowing only three baserunners in four innings on the mound. Ryan Noack (1-1) took the loss for Concordia (2-2) after allowing 4 hits in 1 1/3 innings.

Oversen entered the game with Goshen trailing 6-5 in the bottom of the fifth inning. Concordia led 4-3 after a first inning that saw the teams combine for four errors, two hits and six walks. Right fielder Corey Johnson, a junior, scored the tying run in the top of the second on an Andrade double-play grounder.

Concordia scored twice in the fourth inning before Goshen tied the game with single runs in the fifth and sixth. Johnson (3-for-4) and Swisher (3-for-5) led a Goshen attack that pounded out 15 hits; Johnson scored three times, while Cannizzo scored twice and was one of four Maple Leafs with two hits.

Zach Thompson, a first-year, started the game, allowed four hits in four innings, and received no decision. Neither Goshen pitcher was charged with an earned run.

The doubleheader’s first game did not feature as much offense in the early going: where Goshen led 3-0 after half an inning in the nightcap, the Leafs didn’t manage that 3-0 lead until the fourth inning in the first game. Concordia tied the score at 3 in their half of the fourth, scoring one run on a double, another on a sacrifice fly, and the equalizer on an error. Concordia pushed home the game’s final three runs on five hits in the sixth to come away with a 6-3 victory.

Evan Novak (1-0) took the win for Concordia with a perfect 4-out relief outing. C.J. Superczynski (0-1), a junior, took the loss for Goshen. Caleb Yoder, another junior, started the game and received no decision after allowing two earned runs in five innings.

Goshen (5-6) returns to action with its home opener Saturday afternoon. The Maple Leafs will take on Lourdes University, which is 4-10 on the season entering a doubleheader with Bethel tomorrow. First pitch in the doubleheader is set for 1 p.m. with live play-by-play coverage of the first game available on the Globe (91.1 FM). The game is expected to take place under near-record high temperatures: the National Weather Service forecasts a high of 73 for Saturday, two degrees short of the all-time March 17 record, set in 1894.

After Saturday’s twinbill, two more doubleheaders are on tap for the Maple Leafs: Sunday at Purdue North Central (5-8 through Tuesday), a team with whom Goshen split a doubleheader last year, and Tuesday at Saint Francis (4-10 through Monday), the first two games of the 36-game Mid-Central College Conference schedule.