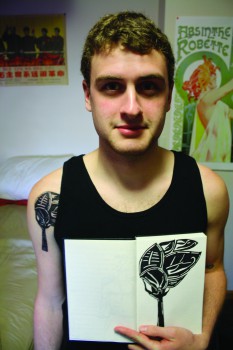 One night while laying in bed on SST in China, Ben Adams had an idea. The next morning, he woke up and drew the sketch that would become his second tattoo.

Adams had been thinking about getting another tattoo for a while. “I work on lots of ideas in my sketchbook,” he said. A junior art major with a focus on graphic design, he was inspired by the work of the artist who designed his first tattoo. “After that,” he said, “I thought, ‘I could do this myself.’”

The sketch Adams did in China took about an hour to draw, which is less time than it took to actually get inked. To him, it was worth it. “I see this as a different way of expressing art that most people don’t think about,” said Adams. “It’s a way to communicate using art.”