Tim Landes, a junior art major, likes to make things, but the is interested in more than just producing art: his sculptures are an exercise in recycling and giving attention to the forgotten. 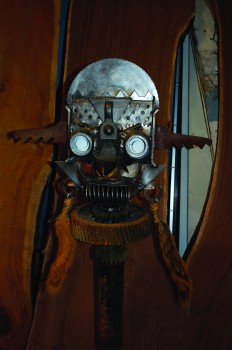 “In sculpture, I work with what I find,” said Landes. “I focus on what is cast off and forgotten about by society and then combine and transform it into something new that is a composite of what I have found.”

Landes’ interest in sculpture was fueled by a welding course he took at a community college in Albuquerque, N.M. during a year of service between high school and college. “Work was slow, so my bosses encouraged me to be creative,”  he explained.

Since then, Landes’ materials have expanded to include not only metal but objects made from wood, plastic, glass and rubber.

Landes, who has spent significant time working and learning outdoors, takes an environmentally-friendly approach to his work.

“I’ve realized that if I’m going to make something, I have to be conscious about where my materials are coming from. I’m not going to go out and buy new steel.”

Landes said that this piece began because he “had some blocks of wood and felt like nailing stuff.” Though he keeps a sketchbook and brainstorms often, Landes allows the ultimate inspiration to come from the materials themselves.

“As I work, I try and listen to the language of the object or the material so that I can find its place within the larger work,” explained Landes. “I think of it as an ongoing conversation between all of the pieces and each action; a weld, a cut, a bend, a hammer strike or just picking something up off the ground are all important parts of the process.”

Although he loves sculpture, Landes does not want to limit himself to one particular medium. When asked about the his plans for pursuing his work in the future, Landes acknowledged that while he has submitted work to several regional shows and it’s always nice to sell, his main goal is to express his experience and to participate in the process. “It’s fun,” said Landes. “I just really enjoy making things.”