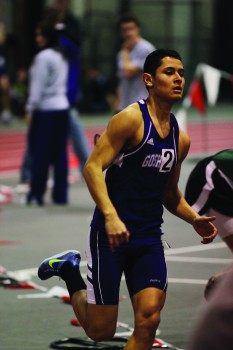 That margin would have been enough for a pair of Maple Leafs to qualify for nationals at the Purdue University Boilermaker Invitational on Saturday. Instead, Daniel Zelaya, a first-year, and Billy Funk, a senior, will turn their attention to the outdoor season.

Both runners finished third in their races. Funk was the top NAIA competitor in the mile, running 4:24.64 and missing the standard by 1.44 seconds. In the 800-meter run, Zelaya came even closer to qualifying, finishing with a 1:57.64 mark that is within 0.3 seconds of the national-qualifying time.

A trio of high-jumpers placed for Goshen. Sam Jones, a junior, was third in 6’4¾”, trailing a pair of athletes from NCAA Division I institutions. Kyle Mishler, a sophomore, placed fifth clearing 6’¾”, while Thomas Leonard, a first-year, was seventh in 5’8¾”. Kyle Capps, a sophomore, took third in the long jump by leaping 21’7″.

Brock GunderKline, a junior, and Moses Kaelo, a first-year, rounded out Goshen’s octet of top-eight finishers in individual events. GunderKline was seventh in the 800, trailing Zelaya by nine seconds in 2:06.82, while Kaelo finished fifth in a 4:39.84 mile. The 4×400 relay team of Zelaya, GunderKline, Funk, and Oscar Amaro-Renteria, a junior, was fourth in 3:37.32.

Summer Hasan, a senior, was the highest Goshen placer on the women’s side, clearing 12’10¼” to finish ninth in the long jump.

After a weekend without competition, five Maple Leafs will compete in the NAIA Indoor National Championship beginning Thursday, March 1 in Geneva, Ohio. Aside from Jones, the rest of Goshen’s athletes will be race walkers: David Horst, a senior; Jacob GunderKline and Erin Helmuth, both juniors; and Mitchell Brickson, a first-year.