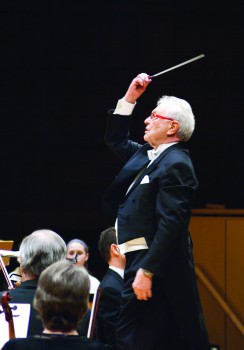 What do you get when you combine 105 GC choir members, 30 high school singers from northern Indiana and northeastern Ohio, 40 musicians of the Toledo Symphony Orchestra, 10 Shout for Joy youth choir members, five professional vocal soloists and GC alumnus Vance George?  For one, you get a lot of rehearsals and months of preparation for all parties involved. But more importantly, you get a collaboration that crosses state lines and a show that brings down the house.

Last Sunday, this massive group of performers converged on Sauder Concert Hall as part of the Goshen College Performing Arts Series to perform works by Faure, Bach, Hayden and Copland.  The opening choral number, Faure’s “Requiem,” was dedicated to the life and legacy of Dr. James Miller.

In response to the concert, Deb Brubaker, director of GC Chamber Choir and Women’s World Music Choir, said, “I was very pleased with the result of the concert.  The audience was quite excited about the choice and variety of music.  I heard many comments about the strength and power of the choir’s sound.  I was particularly excited about the richness, clarity, and energy that the choirs sang with.  It’s rewarding to be able to offer an opportunity for our college singers to perform major works with an orchestra.”

Maestro George, conductor emeritus of the San Francisco Symphony Chorus, and all of the performers received a standing ovation after closing with Aaron Copland’s “I Bought Me a Cat.”  Under George’s direction, the performers lightened the mood in the hall with this final American folk song, a stark contrast to the themes of life and death played out in “Requiem.” However, the energy sustained throughout the entire concert served as a testament to the hard work and mastery of extensive repertoire of all involved.