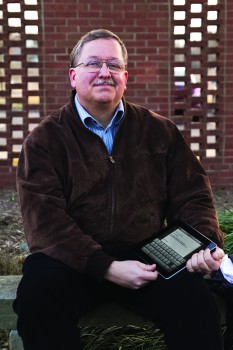 Thirty years ago this spring, I became a graduate of Goshen College without ever using a computer in an academic course. Fifteen years later I returned to GC to become its ITS Director. In two years, we made the Yahoo! Most-Wired Campus list, and today our students are mostly wireless.

Things we take for granted today—YouTube, Moodle, Facebook, Skype, Wikipedia, iPhones, iPods, etc.—either didn’t exist 10 years ago or were barely on the radar. GC has experienced unprecedented technology-driven change over the last three decades, much of it organic and gradual, but nearly all of it facilitated by our very intentional decisions to equip the campus with computers, build networks wired and wireless, put projection and computing in classrooms and maintain a fast Internet connection.

Our technological tools and infrastructure are now inextricably tied to our academic endeavors and the operation of our campus. They define the possible. What we do inside the realm of the possible—that is where innovation can emerge, guided by our individual and collective values.

Many people think of innovation in almost mystical terms. But the reality is that most innovation is planned. It is a decision to be innovative and a discipline to stay innovative. The decision to integrate iPads into the new GC Core is fundamentally a decision to innovate. Our leaders have rightly discerned that innovation in the marketplace and in higher ed has shifted to mobile technology, that our incoming freshmen are increasingly coming from technology-intensive high school experiences and the iPad is one of the key drivers in the emerging post-PC era.

If we equip the campus with iPads, we will have expanded the realm of what is possible and created an environment where new and wonderful things can and will happen. The decision should be applauded. It becomes our digital foundation for the next decade, even as we continue to use Macs and PCs to get more sophisticated technology tasks done. It will help sustain and enhance our culture of innovation, guided and shaped by our faculty and students.

Last week, Professor John Roth wrote eloquently about his concerns about this very initiative, and I agree with many (though not all) of his concerns. He is a passionate exponent for what I would call our culture of preservation, which values who we are and have been—our values, our accomplishments, our contribution to the world.

I would like to think that I too, am a champion of our culture of preservation (just as John is not a technophobe!), but will freely acknowledge that these worlds are often in tension. That tension can be healthy and valuable because it mirrors what will be going on for the rest of your life. We live in an era of rapid change where new activities, technologies and ways of being, compete with and often displace older ones. We will continually be faced with decisions about what to retain and what to discard so we must be both grounded in our beliefs and values and skilled at the discernment process.

We say we value intercultural competency, and we put that into practice by going into cultures that are not our own and learning about them through experience. There is a mobile technology culture and an emerging tablet culture that is closely intertwined with youth culture. For most faculty and staff and many students, it is not our own, but I believe firmly and passionately that now is the time, as we roll out the GC Core, to enter that culture, learn about it, critique it, shape it and even transform it.

To stand on the sidelines as one of the most significant technological transformations in recent history unfolds would be an enormous loss for an institution as fine as Goshen College. All true intercultural experiences are transformational, but the mobile technology culture is evolving so rapidly that no one can fully comprehend where it is going. We who are older long for someone to tell us the rules and what works and where it all leads, but no one can. To enter that kind of culture is simultaneously energizing and terrifying, but it’s also the kind of place where transformation and innovation happen.

It is early enough in the evolution of iPads as pedagogical devices that the very exploration of them as learning tools has academic merit. If we do proceed, I would respectfully ask the campus community and alumni to refrain from creating a flame-fest on the Facebook page, but rather to embrace this opportunity to innovate brilliantly (with or without iPads), with joy and passion and energy, even as we discuss and debate the merits of these devices in higher ed. Along the way, there will be disappointments, inconsistencies and setbacks that accompany the learnings, progress and triumphs—and lots of stimulating, thought-provoking conversation. And that is a wonderful metaphor for life itself.