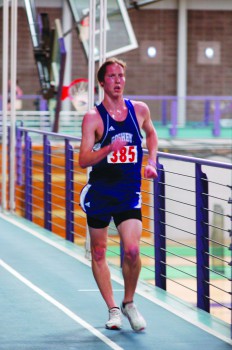 In other words, it was a fairly typical weekend for Goshen’s indoor track and field programs.

The national qualification and school records came on Saturday at Indiana Wesleyan University’s Wildcat Invitational. Sam Jones, a junior competing for just the second time this year, broke Kyle Laker’s year-old school record by less than an inch. In addition, Jones hit the NAIA national-qualifying standard on the nose with a leap of 6’6¾” that was good for first place overall.

For the second consecutive week, the men’s distance medley relay team was a bright spot for head coach Doug Yoder’s team. Alain Chaponniere, a senior; Daniel Zelaya, a first-year; Brock GunderKline, a junior; and Billy Funk, a senior, combined to break another school record, one that Chaponniere and Funk helped set in 2009. Like Jones in the high jump, the DMR team finished first: their time of 10:39.43 was 0.91 seconds faster than the previous record and more than 30 seconds in front of second-place Grace. The quartet is within 14 seconds of the standard for the national meet, which begins Thursday, March 1 in Geneva, Ohio.

Four more Maple Leafs who have already qualified for nationals were in action Friday night on Goshen’s home track. Jacob GunderKline and Erin Helmuth, both juniors, took the top spots in their race walk events. GunderKline was the first of eight male walkers across the line in 13:21.82. Helmuth opened a seven-second lead in the first lap after the starting horn and proceeded to win by more than two and a half minutes in 15:47.90.

David Horst, a senior, and Mitchell Brickson, a first-year, finished Goshen’s sweep of the top three men’s spots. Horst was second in 14:22.84, while Brickson walked to third in 14:33.20. Barrett Donna, a junior, set a new personal best, finishing eighth in 17:22.00.

The Maple Leafs will be in action this weekend in their final regular-season meet, the Boilermaker Invitational at Purdue University. That meet begins Saturday at 11 a.m.