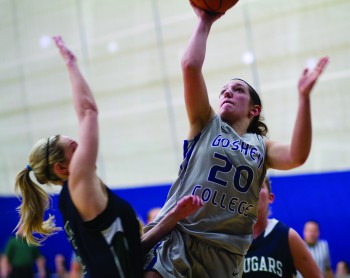 A pair of double-digit scoring totals were not enough to keep the Maple Leafs in the game as Goshen fell 78-40 to Huntington Wednesday night in Gunden Gymnasium.

Sam Hawk, a junior forward, led Goshen with 13 points, and Jaime Stack, a first-year forward, chipped in with 10 more to go with a team-high eight rebounds. But the totals of those two players could not match a Forester attack that put four players in double figures and outrebounded Goshen 41-29.

Huntington (18-9, 10-7) opened the game shooting 15-of-29 from the floor before halftime, taking a 41-31 lead into the locker room at halftime. With the Maple Leafs (3-26, 0-17) looking for a quick run out of the intermission, Huntington scored the first six points of the second period.

On Saturday, Feb. 11, the Leafs dropped a 66-55 game to Spring Arbor University at the SAU Fieldhouse. Sierria Burlage, a first-year, led Goshen with 12 points and 13 rebounds. Forward Jessica Garrison, a sophomore, led all players with 13 points for the Cougars (8-19, 4-12).

The Maple Leafs conclude their season Saturday with a trip to Luckey Arena in Marion, Ind., to play No. 1 Indiana Wesleyan (27-2, 16-1).