From baller to scholar: Paul Keim tells his story 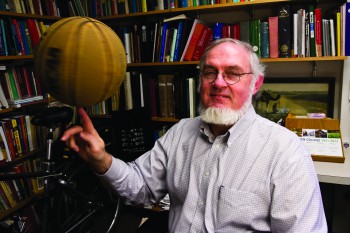 Ask most Goshen College students to describe Paul Keim, professor of Bible and religion, in a nutshell, and they will spit back three words with relative ease: beard, languages and basketball. Keim kindly agreed to help distill the latter two for the GC community, not divulging the mystery of the beard itself but perhaps revealing the man behind the beard nonetheless.

First of all, Keim can read no fewer than 15 languages. He qualifies his linguistic ability in terms of literacy because a good number of the languages he has mastered are dead languages. However, not all of his languages skills are confined to paper. “I speak German and Polish fluently, and I know a smattering of other modern languages,” said Keim.

While it may not appear on his resume, Keim also speaks the language of basketball and has in fact been fluent in the game for quite some time. He played basketball all through high school and proved to be somewhat of a local star, leading his Concord High School team to the sectional finals his senior year to play in front of a crowd 6,000 fans strong. That season, Keim was the leading scorer in Elkhart County.

One of the most frequent reminders of Keim’s high school athletic career resides just down the hall from his office on the third floor of Wyse. “I remember playing against Joe Liechty of the PJCS department when he was on the Goshen High School team, and we were named to the Academic All-Star Team together,” said Keim. “I think you only needed a C average to earn that honor at the time.”

After being recruited by several collegiate programs, Keim settled on a small school in Kansas. There, he planned both his academic and athletic careers only to find out that their course catalog was void of any language courses, which was what he had planned to study. “After that, I decided to come to Goshen College. We had a competitive conference and played for a full Union Gym most games,” he recounted.

Keim looks back on his time as a GC student with fondness, saying that he found both good players and good coaches to share in the “labor of love,” and still keeps in touch with both teammates and fellow conference players.

Although Keim’s formal basketball career ended upon graduation from GC, he continued to play through graduate school, participating in intramural games at Harvard and even going as far as Poland to play in the early 1990s. “Many of my (intramural) teammates had played at Division I Ivy League schools, so I organized a trip, serving as the translator, and we played several Polish professional teams during the week that we were there.”

These days, Keim finds a healthy outlet for his love of the game in bi-weekly 3 v. 3 games with other faculty and staff at the Recreation-Fitness Center in addition to intramural games.