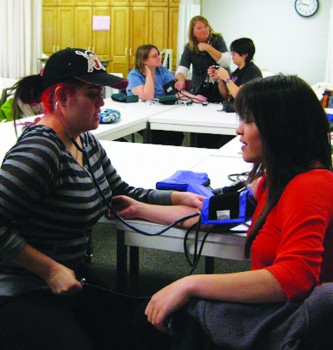 The idea began on a porch at sunset.

It was the fall of 1973 and several nursing faculty members were attending a state nursing convention. Merv Helmuth, an associate professor of nursing, remembers he sat in a rocking chair when ideas started spinning for a mock convention.

“We were looking for a new way to help students learn leadership skills,” said Helmuth. “The convention was born in an hour.”

For the last 42 years, Goshen College nursing faculty and students have gathered for the Nursing Mock Convention on campus. Helmuth, who retired last year, has coordinated every one. This year’s convention, “Improving Patient Care: Building on the Foundation of Nursing,” is set for Friday in the Church-Chapel Fellowship Hall and will be the college’s last.

All sophomore, junior and senior nursing students and all nursing faculty are required to attend. Prior to the convention, students work in seven districts, or groups, to take an idea and write a resolution they have developed. The convention board picks three groups’ resolutions to be debated by all students at the convention. This year’s resolution issues include telenursing, wellness programs and non-pharmacological pain management.

“Everyone needs to get to the mic at least once,” said Helmuth. “We want to help people find a way to be honest with themselves and be good professionals in the process. It is a mind-changing event. It is what students might expect at a real convention.”

In addition to debates, Jan Emswiler, assistant professor of nursing, will deliver a keynote address about the foundations of nursing, specifically through Florence Nightingale, and Emswiler’s experience as a nurse in Tanzania.

“The convention is important because it provides a hands-on participatory project full of learning opportunities for students,” said Emswiler. “The process provides for some heated discussions and brings to light the complexities involved in making ethical decisions in nursing care.”

Other activities include a catered meal, an after-party and job opportunities presented by local businesses, including Greencroft, Oaklawn and Miller’s Merry Manor. Marissa Kauffman, a senior nursing major who serves as executive director on the convention board, cites the after-party as a favorite part of past conventions.

Kauffman, along with nursing students and fellow board members Chris Lamble, Elizabeth Lagan, Emily Yoder, Kelly Frey and Naomi Kramer, met with Helmuth weekly since September to plan for the convention.

“Because Merv has worked with the convention for such a long time, he knows about all of the details,” said Kauffman. “Since this is the last year of the convention, we have some more freedom with the budget and are trying to make this last year a memorable one for all. Students should expect to learn a lot, get to know faculty and each other a little better, eat some great food and have a fun day.”

Frey, who is president of the board, says there are plans to honor this last convention.

“As a memorial to “Mock” and also to Merv we will be taking pictures as a department, as the executive board and in our classes to remember who was involved in the final year’s convention,” said Frey. “We’ll be giving the framed photos to the nursing department.”

Helmuth said he will miss the relationships he has formed with this year’s board, who is “absolutely fantastic and so willing to do everything.”

Said Helmuth, “For 42 years I have really enjoyed helping the department grow and develope and become the good department it is. This event cannot be replaced.”