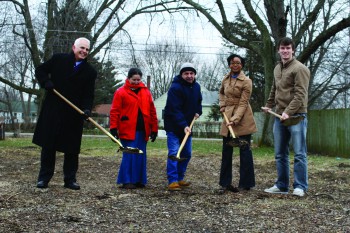 Eddie Mayorga smiled as he held soil up on his golden shovelhead for a photo. Earlier, laughs were heard as some Goshen College representatives struggled to pierce the ground. On Tuesday, a group of about 25 gathered for the ground breaking of Moyarga’s Habitat for Humanity home site.

The event included sharing from Tom McCarther, executive director of Habitat for Humanity, and Bill Born, vice president for student life, as well as a benediction from Goshen President Jim Brenneman. Mayorga also spoke, thanking Habitat for Humanity and Goshen College for their support.

Originally from Puerto Barrios, Guatemala, Mayorga lived in Los Angeles for 15 years after immigrating to the United States. There he met his wife Zoila and moved to Goshen in 1998.

Before the Mayorgas transition to Goshen, they hadn’t heard of Goshen College or Mennonites. According to the Mayorgas, their move to the Midwest was motivated by a desire to leave the violence and turbulence of inner city life and influenced by the  allure of jobs in the Goshen area. Now, after 14 years in Goshen and 12 years of working at Goshen College, Mayorga will have his own home.

Mayorga took a short break from working to answer a few questions in Spanish. “If I could hug everyone I would,” he said with a smile. “I primarily thank God for this opportunity and for the support the college is offering me.”

Mayorga added, “I’m thankful to President Brenneman, my coworkers, the student body and the college as a whole for helping me and my family in this project.”

Proceeds from a basketball game sponsored by the athletics department, student life, and the men of Serving With All Gifts have already been directed towards Moyarga’s Habitat for Humanity project.

Upcoming events in support of the project include the Menno-Night Live! Kick-off, the 4th annual Maple Leaf Indoor Marathon, and a community brunch sponsored by AVI Fresh.

On Saturday the “Menno-Night Live!” Kick-off will be performed twice; the first at 7:30 p.m. in a condensed form for the broader Goshen community. After the community show, the participants will again perform for the student body at 10:00 p.m. Both events will be ASL interpreted.

“We are excited to be a part of what’s happening with Habitat for Humanity,” said Davonne Harris, director of Campus Activities Council. “We’re really happy to show our servant leadership and make the main focus of Kick-off fundraising for the Eddie Mayorga Habitat for Humanity project.”

The Kick-off theme is Menno-Night Live!, a parody of the popular NBC show, Saturday Night Live. The show is expected to last two hours with a short intermission. Contemporary dance, acting bits, lots of singing, and plenty of acoustic guitar and impersonations can be anticipated.

Students and community members can purchase tickets at the Welcome Center during business hours and in the dining hall during lunch hours today. Tickets can also be purchased online at www.goshen.edu/tickets.