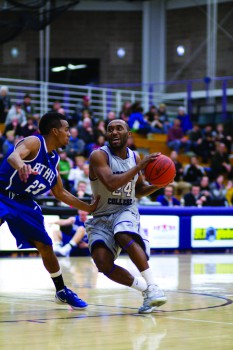 Leafs inching closer to the top of the MCC

Up to the first media timeout with 15:21 left to play in the opening half, the Leafs had converted 6 of 8 from beyond the arc jumping out to a 22-11 lead with junior forward Mathew Martin knocking down three in the first four minutes of the contest.

“It makes things a lot easier when we shoot the ball like that. We’ve really been struggling shooting the ball from threes,” stated Chupp.

The Leafs shot a phenomenal 61 percent (37-61) from the field and knocked down 9 of 21 from the perimeter for 43 percent for the game. But what really opened up the offense Tuesday night for the Leafs was their ability to move the basketball as Coach Chupp explained.

“I’ll tell you what I was most pleased with tonight was the 21 assist,” said Chupp. “I thought we were really unselfish tonight; we passed the ball. The way [Bethel] traps and gambles, if you move the ball you’re going to get good looks and I thought we did tonight. I was really pleased offensively.”

With nine minutes to play in regulation, the Leafs mounted a 17 point lead, their largest of the night, but the Pilots went on a 24-12 run over an eight minute period with junior Pilot guard Landon Booker taking over and getting nine of his 27 points along with two steals to create the offense during the run.

“Booker was a stud tonight. We couldn’t keep him out of the paint and we knew that going in. But he was really aggressive and I thought he was really good tonight,” acknowledged Chupp.

With 55 seconds remaining and what was a 17 point lead was trimmed down to five, the Leafs needed the combination of free throws and solid defensive possessions in the waning seconds. That’s what they got. Freshman guard Kody Chandler and junior forward Garner Small converted three charity shots between them to seal the 92-84 victory for the Leafs.

Four of the nine players that entered the box score Tuesday night were in double figures as junior Mike Betcher tallied 13 points with eight rebounds, fellow junior Mathew Martin added 17, and freshman Kody Chandler had a game high 23 with classmate Tyler Hall contributing 11 off the bench.

The Maple Leafs will head back on the road to take on a vote-receiving St. Francis (15-8, 6-5) team and look to make a push for the top of the Mid-Central College Conference.