Night at the RFC offered something for everyone 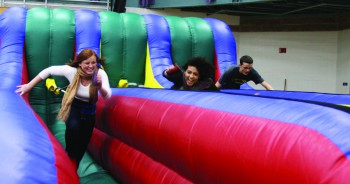 This past Friday, the Recreation-Fitness Center extended its hours to 1:00 a.m. so that students could stop in for food, recreation and considerable stress relief. All of the RFC’s usual services such as the rock wall and swimming pool were available, but several new options were also offered.

Nearly 150 students packed the gym, lining up to participate in the many featured activities. Among these were an inflatable obstacle course and a moon bounce that doubled as a boxing ring. One student suggested that the padded contact sports were a much-needed means to release anxiety felt by otherwise nonviolent and stressed college students.

While differing in levels of athleticism and competitiveness, participants offered overwhelmingly positive responses to the new activities offered this year. Emma Brooks, a junior, said, “Other Night at the RFCs weren’t as good. They were well planned, but they were more athletic and not as accessible to everyone.”

At the same time, Joel Yoder, a freshman, participated in nearly all of the events, from basketball to bingo. He said, “It’s awesome; the courses are harder so it takes more work.”

Some students didn’t come for games of any sort. A surprising number were happy to stay for the snacks alone. Liz Wittrig, a freshman, said, “I ate and left, but then I got hungry again and came back with Tupperware.” Others competed in a cake walk, which was similar to musical chairs, only featuring cake as a prize.

At the end of the night, students left with tired, contented faces. Many were covered in sweat, others delightfully full of chips and guacamole. They offered brief words of praise and often a quip about their current fitness level, attesting to having enjoyed their night at the RFC.