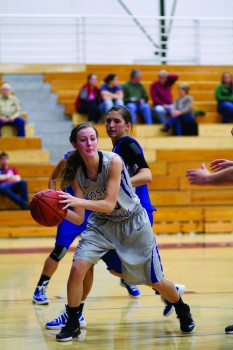 On the first possession of Tuesday night’s Mid-Central Conference contest, Goshen jumped to an early lead. For the first 18 minutes, the Maple Leafs protected the lead on their home floor. In the second half, Bethel demonstrated why they are rated higher than 92 percent of NAIA Division II teams as the Pilots pulled away for a 70-45 victory at Gunden Gymnasium.

Goshen first-year Jaime Stack controlled the opening tip, deflecting the basketball to senior Kaylee Hilliker for the first basket of the game after less than six seconds elapsed. A bit over nine minutes later Sierria Burlage, another first-year, converted a three-point play, capping a 12-0 Goshen run and putting the Leafs in front 16-9. At that point, Bethel had been held to shooting just 14 percent (3-for-22) from the floor. In the final three minutes of the first half, the Pilots were 28-percent shooters, parlaying that and a 27-21 rebounding advantage into a 35-27 lead at the intermission.

The second half removed all doubt regarding Bethel’s position knocking on the door of the national top 10. The Pilots made six of their first 11 field-goal attempts after halftime, taking their largest lead of the game to that point at 53-28 on a pair of free throws with 12:49 to play. From that point forward, the score was even as each team scored 17 points to make the final score 70-45.

The free throws gave Laura Johnson, a Bethel junior, 15 points in the previous 11 minutes; she finished as Bethel’s leading scorer with 17 points. Burlage led all scorers with 19 points, setting a new career high for the second time in less than a week. She also had more rebounds than any other Maple Leaf, leading the team with six while playing every second of the game. Bethel out-rebounded Goshen 42-40, paced by nine from Georgia Boisse, and had 18 assists to Goshen’s eight in a fast-paced game that saw the ball change possession an average of seven times per minute.

Tuesday’s game was the second in four days for the women, who dropped an 80-55 decision to Taylor University Saturday afternoon in Goshen. The duo of Stack and Burlage led the Maple Leafs in both scoring and rebounding: Burlage had 14 points and 7 rebounds while Stack tallied 13 points and grabbed 8 boards. Erica Redweik’s 20 points led a quartet of Trojans in double figures as Taylor moved into a four-way tie for fourth in the MCC at 5-5.

Goshen returns to the floor Saturday afternoon against the University of Saint Francis. The USF game begins a three-game stretch for the Maple Leafs against teams receiving votes in the NAIA Division II coaches’ poll. The Cougars (13-9, 5-5 MCC) lead the conference in scoring, putting up 71.4 points per game, a total they surpassed in the teams’ previous meeting, Dec. 3 in Fort Wayne.