Music to the ears: The Globe to open downtown location 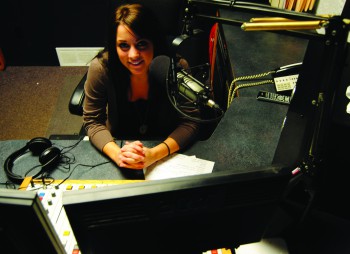 On the corner of Washington Street, next door to Better World Books, there is a brown-papered storefront that has all of downtown Goshen abuzz. The windows may be covered now, but by the next First Friday event the paper will be torn down to unveil Ignition Music. Within that space, 91.1 The Globe is setting up shop.

Steve Martin, a local businessman, GC graduate and lifelong music lover, is the brains behind Ignition Music. Martin started volunteering at The Globe through a friendship with general manager Jason Samuel and began to think of possibilities for bringing sound to the masses.

“Three years ago, I began my nightly show called One Guy’s Opinion,” said Martin. “The idea for a store came from my work. We would get calls at the station asking where people could get this music or see that artist live. Jason and I began discussing a business plan for a live concert series based on artists we play on The Globe.”

Martin believes The Globe is uniquely formatted, a place where Americana and independent music thrive. The most surprising artists, he said, from Mumford and Sons to Adele, do not usually find a home on mainstream radio, but the fans find them anyway.

“The only way artists such as these can support themselves is to tour regularly, but there is no venue in the area,” said Martin. “And for young people to see musicians, they have to leave Goshen. Ignition Music will be a convenient stop between big cities where artists are playing.”

Ignition Music will provide an “all-ages venue” where people can purchase used and old music, including CDs and vinyl, 2-channel equipment, high quality headphones and equipment to record and stream full audio files. Ignition Music will sell what the audience is interested in collecting, spanning the full spectrum—rock, indie, jazz—with many artists that The Globe plays. A listening station will be available to sample whole albums. Customers can also donate their pre-loved music and receive in-store credit for either Ignition Music or Better World Books.

“I want to help people discover the quality and value of high quality recordings,” said Martin. “MP3s are the equivalent to fast food—they can be enjoyed, they taste good, but they are not going to make a healthy audience. Music and the equipment that will play it can last a lifetime if you buy good quality. My goal is to help people get the best sound possible.”

In addition to selling music, Ignition Music will partner with The Globe to bring live broadcasts to the local community. Within the store will be Ignition Garage, a satellite station in the storefront window. Jason Samuel, associate professor of communication and manager of 91.1 The Globe, calls the station a “remote broadcast booth.”

“What Ignition Music offered us is space,” said Samuel. “That will not replace WGCS on campus. Instead, it will increase the visibility of The Globe and Goshen College to help us capitalize on building relationships with the community. We want to contribute to a vibrant downtown. Ignition offered us the perfect opportunity to come into their space and be part of it.”

The station, broadcast through 91.1, hopes to be up and running by April. Ignition Garage will bring artists on The Globe roster who will come to perform live sessions in an intimate setting. There will also be an opportunity for writers and poets to read on-air. Samuel calls the move an experimental learning opportunity, offering some of the same things as the GC station but working more closely with the public. People will be able to watch live broadcasts both inside and outside, and any profits from performances will go to support public radio.

“We will mostly broadcast in the evenings with local speciality nightly programs or anytime there is a significant event where we can help build community and collaborate—First Friday, alumni weekend,” said Samuel. “It’s all part of what I like to call the 360 experience—we will have product, performance and promotion. Artists need a place to come play, there are products for people to buy and they all work in tandem to support us. That’s how a culturally progressive music scene can thrive in a small town like Goshen.”

Said Martin, “The Globe is the catalyst for educating the community about music, and we hope that this store will only add to the development. Community is built when people listen to music together, and we will always reserve space right down front for the kids.”

Ignition Music and Ignition Garage are located at 120 Washington St. and will open in February.