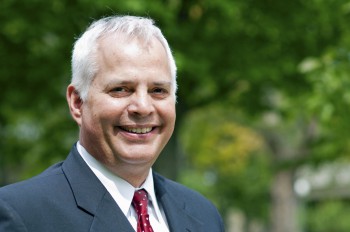 The recent decision by the Goshen College Board of Directors to shift the teaching faculty hiring policy
using the criteria of commitment to the five core values as primary, instead of Mennonite Church membership is timely.
The decision does not, as a recent article in the Record stated (Dec. 1, 2011, p. 3), set the college “adrift” from our Mennonite Church denominational ties, nor is it an act of “desperation to try anything and everything to see if we get lucky . . . gambling away that which is essential.” Let me suggest several reasons why I do not agree with such a pessimistic interpretation of the board’s decision:
Firstly, the board’s decision in no way preempts the board’s or president’s ability to monitor Mennonite membership as one factor in determining a good proportional mix of Mennonite and non-Mennonite faculty. Personally, I am quite comfortable with a simple majority of our teaching faculty being members of the Mennonite Church and will, along with the board, monitor that proportional mix.
Secondly, I assume that the five core values as named by a very thoughtful deliberative process before my arrival as president, was done so with the deepest understanding that these values offer an explicit summary of the best of Goshen College and are true to the five-hundred-year heritage of the Mennonite
Church. The five core values are Mennonite equivalents to Goshen College, what St. Ignatius’ Rule is to the Jesuit colleges and universities of the Catholic faith. They are foundational and inclusive.
Thirdly, the evidence presented by the Record article was based on Fr. James Burtachaell’s study entitled “Dying of the Light: The Disengagement of Colleges and Universities from their Christian Churches” (1998). It was a study of 17 colleges and universities, at least five of whom, by my quick count, are viewed and lauded by their own denominations as flagship colleges. Ask any Lutheran to name the top five colleges or universities of their faith and, surely, St. Olaf’s University and Concordia would be among them. Even some sympathizers of Burtachaell’s overall thesis have argued that his  methodology was flawed in that it entailed selective interviews and anecdotal data that supported his pre-determined thesis. Additionally, The Council for Christian Colleges and Universities offered its
critique to such a pessimistic outlook in its book entitled “Shining Lights,” which argues that its 100-plus coalition of colleges defy the inevitability factor of disengagement central to Burtachaell’s worldview. Richard Hughes and William Adrian’s Models for Christian Higher Education (14 case studies) and Robert
Benne’s Quality with Soul (six case studies), offer wonderfully nuanced “full-orbed, multidimensional assessments” of a spectrum of Christian colleges that have maintained close denominational ties even without faculty-mix policies.
Fourthly, according to Robert Benne, the “vision” or story that a college or university tells of itself, alongside its practices and the people who are part of it, all play their role in keeping faith with a college’s denominational roots. The “thickness” of that story matters. Goshen College has a very thick story. And that is good. Just one among many, many examples of its thickness, in terms of accountability to the Mennonite Church, is represented by the fact that 75% of the members of the GC
Board have to be members of the Mennonite Church, which in turn are appointed by the Mennonite Education Agency’s Board (MEA), whose members are appointed by the Executive Board of the Mennonite Church and delegates. In other words, Goshen College is overseen by three boards, of whom only four members may be non-Mennonite. Such thickness allows us some flexibility in our hiring
practices without compromising our denominational commitments.
Finally, far from being a college “adrift,” I am thrilled to see how Goshen College continues to align everything (policies, practices, curriculum, tenure decisions, student learning outcomes and other programs) around our vision of becoming a leader in liberal arts education focusing on international, intercultural, interdisciplinary, integrative teaching and learning. It is time we have the flexibility to hire a teaching faculty that embodies this intercultural vision as well. The board’s decision offers this possibility such that GC can better realize its vision and be seen for what it has always been: a “shining light.”
By Jim Brenneman, President