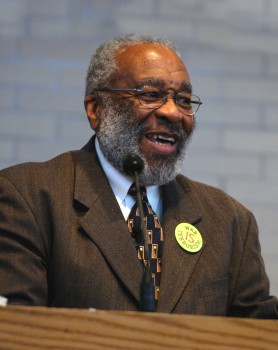 As a part of Martin Luther King Jr. Day activities, civil rights pioneer Dr. Vincent Harding will speak to the Goshen College community in the Church-Chapel on the theme of “Hope, History and Change” at convocation on Monday, Jan. 16.

Harding was a close friend of Martin Luther King Jr. while living around the corner from him in Atlanta, Ga. He drafted King’s speech, “Beyond Vietnam,” given on April 4, 1964 at Riverside Church. Harding became the first director of the Martin Luther King Jr. Center for Nonviolent Social Change in 1968, a few years after King’s death.

Harding and his late wife, Rosemarie Freeney Harding, began their activist work in the Mennonite Church in Chicago, Ill. In 1960 the couple moved to Atlanta to join with King in the Southern Freedom movement as teachers of spiritually-based social activism and nonviolence trainers.There, the Hardings directed the Mennonite Voluntary Service unit from 1961 to 1964, which placed volunteers into black service organizations, working toward racial reconciliation.

The Voluntary Service unit was centralized in a house on Houston Street and came to be known as Mennonite House. Volunteers invited people of all races, including Coretta Scott King, the Peace Marchers and neighbors, to join with them over dinner at the “black and white table.” In 1964, the Hardings left the Mennonite House so that Mr. Harding could work on his doctoral dissertation.

Harding earned his B.A. in history from City University of New York and continued to earn his M.A. and Ph.D. from the University of Chicago. He has been a professor at Pendle Hill Quaker Study Center, Temple University, the University of Pennsylvania and the Iliff School of Theology in Denver, Colo.

“Dr. Harding is eloquently able to discuss the legacy of Dr. King and share stories of hope,”said Odelet Nance, director of multicultural affairs. “We will be challenged to have conversations about current issues of freedom, justice and transformation that build campgrounds of renewal.

On-campus activities to celebrate King’s work begin with Harding’s participation in a community conversation in the Umble Center on Sunday, Jan. 15 at 4:00 p.m. A candlelight vigil and March for Freedom and Justice will begin in Umble Center at 5:30 p.m. and will end in the KMY Connector at 7:00 p.m. The event will feature African American spirituals, reflections on themes of freedom and justice and displays from service and activism organizations.

The GC English department will co-sponsor the Spoken Word Coffeehouse from 9:00 to 10:00 a.m. in the Church-Chapel Fellowship Hall on Monday, Jan. 16. Students and faculty will recite poetry, stories and King’s speeches. Convocation with Harding will follow the event at 10:00 a.m.

A community luncheon at 11:30 a.m. will take place on Monday in the Church-Chapel Fellowship Hall. The cost is $18 per person or $144 per table of eight people. Reservations should be made with the GC Welcome Center.