A hot performance at First Fridays 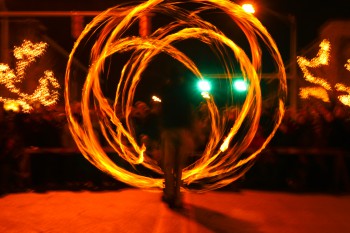 Goshen’s First Fridays event on Jan. 6, themed “fire and ice,” was eventful with food and entertainment. Ice sculptures lined Main Street, featuring themes from local businesses. A chili competition between businesses on Saturday heated up the end of the two-day event. Perhaps the hottest part of the celebration, though, was the Pyrotation Nation fire spinning performance on Washington Blvd. on Friday night.

Pyrotation Nation, Inc. (PN) has been in business for less than one year and is comprised of nine fire spinners and five fire safety personnel. Performers use poi, rope dart, nunchucks and flaming staffs to entertain their audiences. The company has performed publicly in Elkhart parks and other community events in the Michiana area.

The art of fire spinning originated in New Zealand as a Maori tribal ritual. Poi, a ball attached to a metal chain, was the fire spinning instrument of choice. The ball is ignited on fire and swung around, seemingly creating circles of fire in midair. Maori men used this practice to prepare for battle, while women used it to exercise their wrists for better basket weaving dexterity.

Alex Kissel, 21, a performing member and secretary of PN from Elkhart, Ind. chooses to spin poi. He has been practicing the art for nearly 2 years after a friend convinced him to start.

Kissel works in landscaping and with cars during the day and practices fire spinning in the evenings. His hope is that he will one day be able to do fire spinning as his full-time job.

The PN members practice skills and choreograph routines in an Elkhart parking lot for several hours a week. Music is added to performances and some spinners practice partner tricks. Beginners practice spinning the instruments without fire and add it to practice as their skills improve.

Steve “Steve-O” Gibson, 26, a Pyrotation Nation performer from Elkhart, Ind. said, “Although it looks dangerous, if you are a professional it’s not that hard.” Gibson began spinning glow sticks two years ago and now spins fire. “It takes a little dedication and hard work.”

The young company, which began as a group of friends spinning fire, hopes to perform more shows and create a line of pyrotechnic gear in the future.

“It’s my favorite thing to do,” Kissel said about fire spinning. “It’s our lifestyle.”