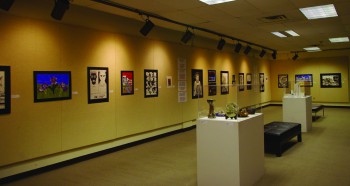 Bird migration, lives spent between two cultures and the Occupy Wall Street movement are just some of the themes that Goshen College artists brought to pieces for the “North and South” exhibit currently on display in the Good Library gallery.

This is the second year that the art department, along with the GC art club, organized a thematic exhibition of student work. Artists were given the open-ended theme “North and South” in the fall semester, and used various media to create work that related this theme to personal understanding or experience. Artists created a diversity of responses and also composed idea statements that explain their thought processes behind the work.

“[The idea statement] forces people to think about the processes they took and put it into words,” said Randy Horst, associate professor of art. The goal of a piece would be to allow the viewer to have “a conversation with the artist,” he said.

In a convocation session on Monday morning, Horst suggested that the theme for this year’s exhibit helps us pose the question of “how we live with things that are diametrically opposed to each other.” In response to this question, the art is not meant to be an “illustration” of “North and South” but rather a representation of personal association with the theme.

Justine Maust, a sophomore and co-president of the GC art club, created a ceramic piece, imprinting photos she took in Tanzania that illustrate the difference between the urban and rural areas.

Sara Alvarez, in her piece entitled “It’s all a Matter of Perspective,” contrasts the views and thoughts of immigrants going north to what some Americans say or think about immigrants who settle here in the States.

The “North and South” exhibit of student artwork runs until March 16, and can be viewed in the basement of the Good Library.