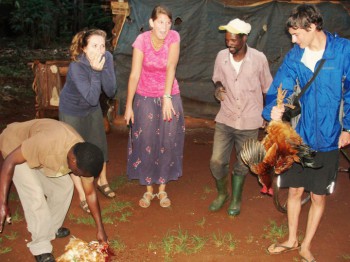 Plucking chicken feathers wasn’t something Leah Thill, Indy Miller and Laura Krabill expected to do on their Study-Service Term in Tanzania last spring. During a visit to a service location one afternoon, however, they learned the process of turning live chickens into a meal for 13.

On a warm March day, Thill, Miller and Krabill met with five other SST-ers in Mogabiri and were invited to a host family’s home for dinner. Sharing a meal with a family is an act of hospitality in Tanzania, and as a token of their appreciation the Goshen College students decided to buy two chickens for the family. “It was a way for us to show how thankful we were for everything our host families did for us,” Krabill said.

The dinner took an interesting twist when the students decided to fully embrace the Tanzanian culture and help prepare the chickens for dinner. “The group volunteered me to slaughter the chicken because I am a vegetarian and they thought it would be funny,” Krabill said.

The preparation involves cutting the chicken’s neck (usually done by men), draining the blood out and putting the body in hot water for couple of seconds. The next step is plucking the chicken’s feathers and skinning it. The chicken meat is then cut into pieces and cooked for about an hour.

After the return from SST, the group has met several times. Just last weekend, 15 of the students in the unit decided to organize a meal and revive the Tanzania chicken experience. They prepared a pilau meal—a mix of rice, chicken and spices.

Thill brought one of the chickens she owned to the dinner. Because of her frequent encounters with these animals while growing up she had always been opposed to killing them, but her SST experience gave her a new perspective of the process.

“SST changed my attitude towards meat and animal slaughter and helped me recognize my own hypocrisy in disconnecting food from the sacrifice of the animal,” Thill said. “I hope that I am now more conscious and sensitive about food waste and food choices.”

For Miller, on the other hand, the slaughtering experience wasn’t completely new. “I’ve never killed an animal before, but my family does big game hunting,” she said. Miller was open to the experience in Tanzania and did the chicken preparation for the meal in Goshen.

This time, the slaughtering went much easier. “In Tanzania it took several minutes to kill the chicken,whereas in Goshen it took only couple of seconds,” Thill said. “It went a lot smoother,” Miller added.

When asked whether they would repeat the chicken experience again, Miller was open to it while Thill and Krabill said they would rather move on. “It makes me more likely to reach for beans, nuts and tofu,” Thill said.