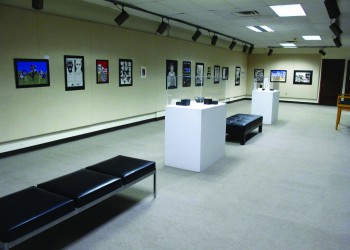 The Goshen College Art Department has teamed with the Art Club to put on the second annual student art show, entitled “North and South.” Located in the Good Library basement, it has been running since late November and will continue until March 16.

“North and South” focuses on the issues involving cultural, social and geographical opposition and ways to bridge the differences. Students from all majors were invited to enter pieces exploring the theme.

The “North and South” exhibit will mark the second year Art Club and the Art Department have held the event. Last year’s exhibit, entitled “Tolerance and the Other,” focused on issues surrounding class separation and social justice issues. Art show themes are meant to leave some room for ambiguity so students have freedom in what they create.

Justine Maust, sophomore art major, entered a series of four pendant necklaces into the exhibit. She related the theme to childhood memories of living in Tanzania and the contrasts she found there.

“I did kind of word associations with memories from my childhood,” said Maust. “Seeing mountains versus the beach and living in the north and spending time in the south, I thought about what memories and associations that brought up.”

Maust and Jess Sprunger, a fellow sophomore art major, have been active participants in art club and head the club this year as its “jovial leaders.”

The pair have been most heavily involved in organizing the event with faculty advisor and art professor Randy Horst. Before inviting any students to engage in preparing pieces for the exhibit, they had to decide on a theme that would foster creativity.

“North and South is a broad topic,” said Sprunger. “People can take it in an ecological, political or ethnic way. It’s really however you choose to engage with the project.”

The exhibit is free and open to the public during library open hours. There will be a reception on Sunday, Jan. 8 from 3 to 5 p.m.

“[The show] is happening to get recognition about both the art club and art talents on campus,” said Sprunger. “And to engage people in these issues that we feel are important.”