Working for women in Uganda, bit by bit 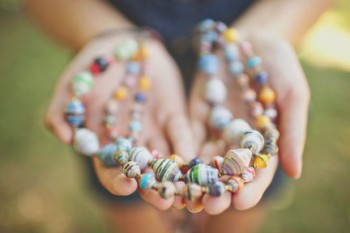 With a smile, she unzips her brown khaki bag and pulls out color. String after string, she floods the table with beads that gently clink as they fall on the wood. Yellow, pink, blue, purple, circular, oval, long and short—from one bag she’s unearthed every color and shape.

“I don’t usually buy jewelry,” she explains, “but once I found beautiful jewelry made by women in Uganda—that could turn their lives around—that’s initially what attracted me to it.”

As she talks, the first snow of a new winter swirls outside the front windows of the coffee shop, chilling Goshen’s sleepy Main Street. Just as the whirl of white boldly welcomes in a new season, Ashley Swartzendruber is charged and ready to embark on something new.

A 2010 Goshen College alumnus, Swartzendruber lives in Goshen with her husband, Jordan. During college, she fell in love with photography. Now, only a year and a half later, she is her own boss, the owner of the blossoming business AshleyDru Photography.

Swartzendruber is taking her work as a photographer one step at a time. “I don’t think past my 30s,” she laughs. But even without the details in place, she knows that she wants to take pictures as long as she is “physically able.” For Swartzendruber, a former GC varsity volleyball player, this might be awhile.

“Capturing the love story of two people is very fulfilling,” she says, sipping her mocha. “It’s going really well; I feel blessed to have all the clients I did. They trusted me, and that feels really, really good.”

But the wedding season is winding down and now, with six long months of ice and snow around the corner, Swartzendruber believes it is time to do more.

For her, more comes in the form of a daylong event promoting jewelry from the organization known as 31 Bits.

Based in California, 31 Bits works with women in Uganda who make jewelry out of rolled recycled paper. 31 Bits provides these women with both an international market to sell their product and a variety of development programs such as English classes, financial training and AIDS/health awareness.

Swartzendruber discovered 31 Bits through a group of photographers and graphic designers she is connected with via her blog. After hearing about the organization, she checked out the 31 Bits website.

As an entrepreneur herself, Swartzendruber is inspired by the organization’s success. “Three women with a goal, an education and a dream, and they achieved it,” she explains. “It’s inspiring to me that just with hard work they could make it happen.”

“The company is becoming very well known, and not for their sake, but for the women in Uganda,” Swartzendruber adds.

This December, her goal is to bring 31 Bits to Goshen. According to Swartzendruber, while lots of stores in California sell 31 Bits jewelry, there is no place nearby to purchase the product, unless you order online.

To bring the artwork here, Swartzendruber will host an all-day party featuring hundreds of pieces of 31 Bits jewelry. The event will take place at the Gift of Gab, located downtown, as a part of Goshen’s First Friday event on December 2.

One of the 63 Ugandan women involved with 31 Bits will be featured. Her story will be shared, and guests will be able to write personal messages that will be delivered to her.

While the event is designed to support the work of 31 Bits, it will also feature a number of local small business owners, including discounts on Gift of Gab products, cupcake samples from a newly founded cupcake business entitled Happy Dance Cupcakes and, as a drawing giveaway, a free photo shoot with Swartzendruber.

Though this is intended as a one-time event, Swartzendruber is already dreaming of selling 31 Bits jewelry—or something similar—in downtown Goshen as a side job in the off-season.

“But that’s long, long term,” she says with a laugh.

For now, as she fingers the multi-colored strands of beads in front of her, Swartzendruber is content to make a beginning.

“This is my first hurrah,” says Swartzendruber, “on my own, out of Goshen.”