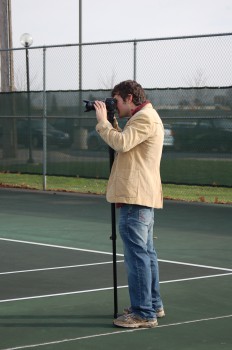 Jacob Landis-Eigsti, who graduated from Goshen College in spring 2011, will present 20 original comedies this Saturday at 10:00 p.m. in the Umble Center. The show will be completely free and is expected to last about 90 minutes.

Landis-Eigsti has been working on films from a very young age. “I just loved the idea of creating something from an idea and sharing it with people; my friends and I remade Star Wars when I was nine,” he said.

That passion for films was apparent during his time at Goshen College, during which he accumulated many awards for his work on film. His short film “Brooding Love 2” won the spring Kick-off in 2011 and went on to win Best College Short Film in the state of Indiana. Another one of his projects, the music video for Phoebe Sharp’s song “Beautiful,” won the award for best College Music Video in Indiana, and second best college video in the nation. More recently his video for Kansas Bible Company beat many other videos to play in one of the largest music conventions in the country. “I’ve made close to 100 films at this point,” Landis-Eigsti said.

Landis-Eigsti started a production company, Reimaginecinema, last February. The Goshen College’s business department’s Entrepreneurship Grant helped Reimaginecinema grow. Recent projects for the production company include a campaign video for Mayor Alan Kauffman, a music video for the band Lotus and a video for the Public Relations department of Goshen College. “I’ll often hire a producer for projects and have many people I work with often,” Landis-Eigsti said. “At this point I’m the only full-time employee but that might change within a year’s time.”

Landis-Eigsti explains that the films for his show on Saturday will follow the theme of “if movies were more like real life.” All the films will be comedies and they will vary in length from 14 seconds to 10 minutes. Some of the films are “Canadian James Bond,” “Monopoly: The Movie” and “A Trailer for Every Romantic Comedy Ever.”

“These films were all made in about 40 days, which has been a little hectic, but fun,” said Landis-Eigsti. “I started them in the second week of October, right after my Kickstarter campaign for the video got started.”

Kickstarter.com was the website that made the funding of the project possible. The Kickstarter website describes what it’s doing as “a new way to fund and follow creativity.” People can go to the website and fund projects that they believe in, and get something in return for their funding. The Kickstarter page for “The Great Short Film Project 2011″ shows that the project has 51 backers who were able to pledge $2,080 dollars towards the project. In return for their investments people received thanks in the form of anything from Jacob Landis-Eigsti’s gratitude to executive producer credit in the show’s credits. “I wouldn’t have been able to do these short films without funding,” Landis-Eigsti said.

For now Landis-Eigsti’s plans include going to Hollywood to finish his education requirements. “Hollywood should be very unique and interesting,” Landis-Eigsti said. ” There should be lots of opportunity, but at the same time it takes a lot of time to build up a name and reputation when you are changing cities, so I’m hoping that I can find work when I go out there.” He added, “This is a really exciting time in the video world…I’m just looking forward to working on a variety of fun projects; making movies is as fun now as when I started when I was nine.”