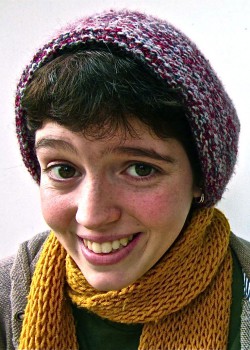 So a few Saturdays ago I was sitting in a Menard’s parking lot. With four violins. And a lot of bags. For 45 minutes. And it was really really cold. And I was unhappy. But I wasn’t unhappy because I was cold, or because I had four violins and lot of bags, or even because scruffy men kept walking past me with 10x4s and cedar mulch. I was unhappy because someone sent me a text message.
To most people, “getting a text message” means receiving information about something from another person without having to talk to anyone on the phone. To me, it means that 45 minutes, or 7 hours, or 3 days later someone will say, “Elspeth, why weren’t you at this thing at this time on this day? Didn’t you get my text?” and I will then have to politely explain for the umpteenth time that no, I do not receive text messages on my phone even though I am a member of the human race, but that I normally respond to phone calls.
After the parking lot incident, however, the time has come for me to drop my feigned nonchalance and be honest: I’m pretty irked when people assume things about me—even little things like, “Oh! Elspeth has a phone. She texts.” I’ve missed a lot of social gatherings, schedule changes, and inside jokes because people have assumed that I can text.
Yes, I recognize that with the vast majority of cell phone-owning Americans on some sort of double-whammy talking/texting plan, thinking about whether someone texts or not isn’t even really part of anyone’s thought process anymore. I know it isn’t part of mine, because I only have one option—I have to face one of my biggest fears and make an actual, real-life phone call—the kind where you hear someone else’s voice and they have to listen to yours. The kind where you have to think on the spot and can’t choose your words carefully enough. The kind where you often end up sounding like an idiot. (I think now is probably an appropriate time for me to apologize to all my texting friends who have received  long, idiotic voicemail messages from me because I cannot send them a text message and think about it while I’m writing it: I am heartily sorry, all of you.)
Fortunately for me, I have a reason not to think about the way the other half lives—texting isn’t something I can do, not even when I want to, and therefore if I’m ever discourteous to someone by calling them when a text message would have fit the bill a bit better, it’s not because I wasn’t thinking about whether they could get phone calls or not…or, more to the point, get text messages or not…but rather because I lead a sad, archaic life of generally disconnected technological despondency and cannot help it; I’m on my family’s stone-age AT&T plan. It’s not my fault.
I’m not saying that everyone I know is thoughtless, or anything like that. I just wanted to raise a bit of awareness on behalf of those who, like me, feel a bit overlooked at times because we don’t get messages in the same way as many of our friends do. So, next time you send a text message to someone you’ve never texted before, you should stop and think about it for a bit, and if it’s urgent, even marginally, call them instead. You might save an Elspeth from 45 cold minutes in a parking lot.
–By Elspeth Stalter, 2012, English & Music major