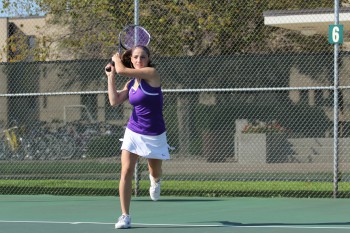 Although the season is over for the Goshen women’s tennis team, the learning experience for the women has just begun.

The team finished the season 2-10, with the two wins being at home against Cornerstone University and Defiance College. Though it was a tough year, the team didn’t lack in effort throughout the season.

With just two seniors on the team, coach Doug Gossman had only a few seasoned players. “I thoroughly enjoyed the season,” Gossman said. “The team worked hard and listened well. We have a great group of young women who play tennis at Goshen College. I believed they learned a lot from their experience this year, which will be helpful in coming years.”

The MCC conference was tough for the team, who had an 0-8 conference record. “Yes, our conference is very good,” Gossman said. “Our team was put in some very difficult situations, playing against some very experienced teams,” Gossman added. “Hopefully we learned what we need to do to improve because of those challenging situations. We will be working on those areas during the off-season.”