Discovering myself in the desert 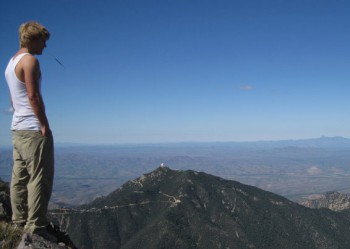 It is difficult to put into words the experiences I had in Tucson, AZ during my year of
service there. I will never forget the people I met, the memories I made, the heat of the summer or the smell of the desert after a monsoon. For an entire year, I lived in the southwestern city of Tucson, which is about an hour’s drive from both Mexico and New Mexico. I served with Mennonite Voluntary Service (MVS) and worked for a non-profit organization called Community Home Repair Projects of Arizona, or CHRPA. I spent my time at CHRPA providing emergency home repairs to low income families. We served people of every age, race and creed, from the elderly living alone to young families of 12 people.
I learned not only how to fix a toilet and a leaky faucet but also how to install gas lines, replace floors, drywall ceilings and re-wire houses. I slowly became a handyman who could fix most household problems. But what was most memorable were the amazing and interesting people I met who sometimes needed someone to talk to more than someone to fix their dripping tub spout.
When I first decided to do MVS, I didn’t exactly have the purest motives. I wanted a
break from the dullness of school and hoped doing MVS could land me in a big city
living the hip, metropolitan life many people dream about. Instead I ended up in Tucson, a sizable city by most standards, but nothing like New York City, Chicago or San Francisco. I was disappointed at first, but the decision to go to Tucson began unraveling the theme of my year off: find joy in the unexpected.
Tucson was a better fit than I could ever have imagined. It provided so many
opportunities for me to be active, experience nature, and re-connect to the earth. I
went mountain biking, camping, hiking, and rock climbing and even got to hike the Grand Canyon and backpacked along the Continental Divide in Colorado.
During my time in Tucson I lived in a house with four other MVSer’s, none of whom I knew before starting my term. Because all four of them were women, I was bit anxious to meet my housemates for the next 12 months, but in the end I could not have asked for a better group of people to live with. They became more than just my housemates, they became my family. They turned me into a vegetarian, taught me how to cook and bake better, and  showed me the power of silence and the importance of self-reflection. My time in Tucson as a volunteer gave me the opportunity to really find out what lies inside of me; to learn the patterns of my soul. It provided me with a renewed joy for knowledge and a developing passion for seeking truth.