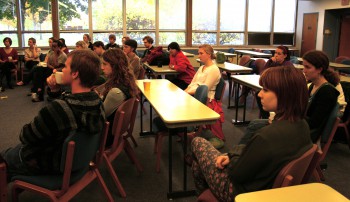 Storytelling and solidarity were equally voiced on Tuesday afternoon as more than 30 students and faculty gathered in Newcomer 17 to share stories of domestic and sexual violence against women around the world.

Presenters told stories of women in Mexico, Nepal, India, Ethiopia, Rwanda, Guatemala, and Costa Rica. Though topics ranged from femicide and sex trafficking to cultural stigmas and gender bias, a common thread soon emerged: the disregard of women as a powerful, indispensable population.

Mara Weaver addressed the connection between war and violence against women. “War zones and military states separate male roles from female roles,” Weaver said. “Men become the model of domination and women come to be seen as passive participants.”

Aradhana Roberts shared a story about her neighbor in India who refused to accuse her abusive husband because of the shame it would cause her family. “This is a culture that allows for discrimination,” she said. “How do you resolve an issue when the women won’t speak up?”

Alongside these stories of violence were equally powerful tales of resistance and solidarity. Samita Thapa told the story of Anuradha Koirala, a 61-year-old Nepalese woman who began Maiti Nepal, a group that fights to prevent sex trafficking on the Nepal-India border. Sandrine Sandrali shared about an organization in Rwanda—Faith Victory Association—that responded to the 1994 genocide by providing education, therapy and safety to battered women and orphans.

For the final 20 minutes, women split up into smaller discussion groups and offered responses to the gathering. One student reflected on her encounter with machismo culture in Peru; another shared a similar experience of cultural assumptions against women in Bolivia.

“The spirit of collectivism in these stories is so inspiring,” Professor Beth Martin Birky said. “But this storytelling is only phase one of awareness. There’s more work to be done.”