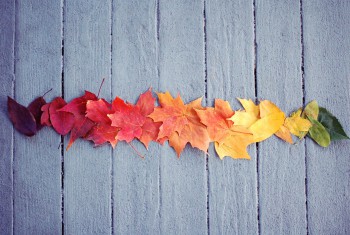 Abbie Miller seldom strays far from her Nikon D50.  Miller, a third-year interdisciplinary Major from Wellman, Iowa, favors photography as her medium of choice due to its instinctual nature. “Photography doesn’t require finding an amazing scene,” she said. “Your eye knows what is interesting.”

According to Miller, the photographer must consider a number of elements, mainly light, angle and structure, when setting up a shot. “You play with these effects and get a photo that only you would take,” Miller said.

One such photo that represents Miller’s artistic touch was captured in response to this year’s Student Art Show theme of North and South.  “I was thinking in terms of geographical markers for this photo,” she said. “During this time of year, the Northern states have really vibrant leaves. The South is still very green.”

Miller cites a number of inspirations for her photography. “I love taking pictures of people,” she said. “Diane Arbus is a photographer that does a lot of beautiful portraits. Sally Mann is another inspiration.”

The inspiration for this particular photo, though, came from the work of Andy Goldsworthy, a British photographer who often captures human-constructed scenes in nature.

Miller’s process was similar. “I went out one afternoon, collected a bunch of leaves, pressed them overnight, and then arranged them in a spectrum.” She chuckled and added, “I definitely used tape.”