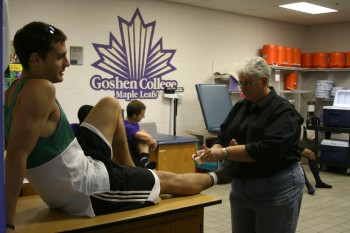 Goshen College athletic trainer Linda Kaminskis has recently been inducted into the Indiana Athletic Trainers Association Hall of Fame. Being inducted to the hall is a prestigious award; only about one or two trainers get inducted each year.

According to the Indiana Athletic Trainers Association website, the selection process ensures that the nominees deserve the award. This process begins with athletic trainers nominating their peers for the award. The nominations then move on to a committee that decides which trainers meet the criteria that the association looks for in its winners.

The criteria for an inductee involves being both a well-respected member of the community and being active in the advancement of the profession of athletic training and sports medicine. The committee then narrows down all the candidates down to one or two; from there these names are sent to the Executive Council, which officially selects the athletic trainer(s) to be inducted to the Hall of Fame.

Kaminskis has been an athletic trainer for nearly 30 years. Prior to that profession, she taught physical education, anatomy and physiology, as well as coaching girls’ basketball. From there she started becoming interested in athletic training. Kaminskis explained, “When I was coaching, my biggest frustration was injured athletes, and as I started exploring, ‘how do I get my athletes back faster’ I ran right into athletic training. It just put everything together for me.”

Kaminskis’ experience with athletic training is extensive and includes three years’ experience volunteering at the NCAA track & field championships, working as an athletic trainer to the ISHAA All-Star Softball North Squad and winning the Indiana Athletic Trainer of the Year in the high school division back in 2005. For the last seven years, Kaminskis has also been the athletic trainer for Goshen College and has been teaching the Sports Medicine Practicum.

The award means a lot to Karninskis, who said that “it validates the hard work that all athletic trainers do day in and day out for and with student athletes. I think what it changes for me is how I perceive myself in the bigger picture. I’m still the person that I was before I won the award. And as I said before, it’s a humbling experience, and I view all athletic trainers in the state as capable of winning this award.”