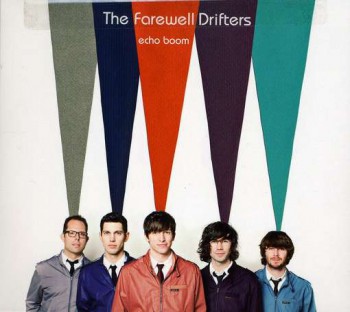 After the Farewell Drifter’s  first album, “Yellow Tag Mondays”, was number 10 on the Billboard Bluegrass Charts, and was highlighted as the “Best of What’s Next” by Paste Magazine, the band kept the momentum up with their second album.

“Echo Boom” was released  in early June and has been playing on the Globe ever since. Peaking at number six on the Billboard Bluegrass Charts, it is the perfect mix of retro and contemporary, including upbeat and slower songs to keep you guessing about the next track.

“Members of this generation are called Echo Boomers, due to the significant increase in birth rates through the 1980s and into the 1990s, and because many of them are the children of baby boomers,”  says Wikipedia.com. This quote is what you will see when you open the front flap of the CD cover, along with a quote from The Farewell Drifters saying, “inspired by our parents’ music, we are creating our own.”

Great tracks off this album include “Punchline” and “Heart of a Slave.” “Punchline” is fun and upbeat, while  “Heart of a Slave” has a great mix of all the instruments, and vocals from lead singer Zach Bevill. If you like a retro 60s feel and an album that is unpredictable, “Echo Boom” is for you.