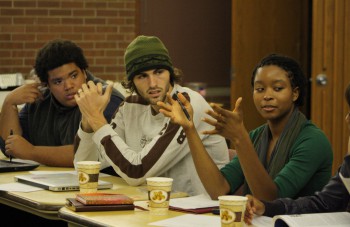 Goshen College students will be Geeks no more, as Student Life seeks alternatives to the “Geek card.”

Geek cards, which previously served as a $35 pass into events hosted by the Campus Activity Council throughout the school year, will not be issued this year.

Bill Born, the vice president of Student Life and dean of students, is calling on the Student Senate to consider alternatives to the Geek program.

It’s time to consider “what a new direction might be,” Born said.

Michele Fanfair Steury, who resigned as director of student activities during the summer, introduced the Geek cards more than five years ago. The program was intended to provide additional revenue for CAC while decreasing the hassle of ticket sales. Prior to the Geek card, students paid for campus activities through tuition fees that were distributed by the college.

Although the Geek card program generated several thousand additional dollars for CAC annually, Born believes better options are available. “I don’t think the Geek card was the solution for a budget that was underfunded,” he said.

He noted that programs at schools of a similar size are able to generate far more revenue for campus activities than does the program at Goshen College. It may be time to examine what other universities are doing right, he said.

Geek cards created considerable controversy among students. Some students questioned whether the cards were worth the investment. Corey Roth, a sophomore, was not a Geek member. “I didn’t actually spend as much money [on events] as the Geek card would’ve cost me, said Roth.

A junior, Mike Holland, meanwhile, paid the fee to have Geek card privileges. “If you were planning on going to a lot of events, it was a great investment,” he said.

Arguments on both sides of the issue appeared in articles in The Record last February.

Born suggested that the answer might be returning to the prior practice of collecting student fees.

According to Born, funds are in place to continue to provide CAC activities as usual for the 2011-2012 school year. Events will be free for Goshen College students. “There are monies available to be sure that CAC can still be done, and be done effectively,” he said.

No final decision has been made regarding the future of the Geek card. This year is intended for reassessment. Born hopes to “create a mechanism for new space and conversation” by finding an alternative to the Geek program that is reasonable for students.

“Can we revisit this whole concept differently?” Born asked.

Ultimately, the decision will lie with Student Senate.

Until then, plans are under way for a packed-full school year of CAC events. Under the new leadership of DaVonne Harris, CAC members Jessica Harrison, Samuel Jones, Joel Kawira and Dolly Zewdie held their first campus event on Sept. 4, the traditional “Movie on the Lawn.”

“Our job is to make sure there is always something fun going on,” said Kawira, who represents the sophomore class . “We want to hear what students have to say; we are open to ideas of things to do.”

The next CAC event will be Fall Kick-Off, a student talent show, on Saturday at 10 p.m. Unlike in the past when students had to buy tickets, Davonne Harris says that this year kick-off tickets will be free.