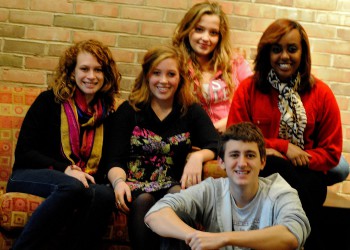 Student Senate has established its new team for the 2011-12 school year. With four Cabinet Members and two Representatives at Large, this year’s team will take on the challenges that each school year brings. Among those most emphasized by Senate members are voicing students’ opinions and improving the communication between the student body and the administration.

Grant Miller, Vasti Rosado, Bethesda Zewdie and Bojana Jankova took the Cabinet Member positions this year. Additions to this Senate team are Alejandro Rodriguez and Rachel Smucker, who were elected Representatives at Large.

Grant Miller is a third-year from Illinois seeking a degree in history and PJCS. His goal for this year is to bring out the alternative viewpoints of students that might not be considered by the administration. Continuing the tradition of “Senate Happy Hours” started by last year’s Student Senate is one way Miller is hoping to achieve this goal.

Interesting fact about Miller: Together with seven other GC students, he spent his summer in Palestine this year learning about the political situation and Palestinian culture, as well as volunteering in a summer camp.

Vasti Rosado is from Puerto Rico and is in her second year as a history and PJCS double major. One of her hopes for this semester is to increase racial integration between students on campus. In addition, she is looking at promoting and organizing more educational activities that will give students opportunities to learn about each other and the world.

Interesting fact about Rosado: She is fully bilingual in Spanish and English.

Bethesda Zewdie is a junior psychology major from Ethiopia. Apart from working on connecting different parts of campus and voicing the opinions of students, she plans to create an annual fund of about $100 that will go towards Kiva, an organization that helps African women start their own business by lending them as little as $25 a year. She also hopes to create joint club events and keep a constant communication with campus leaders and students to learn about their opinions, ideas or suggestions.

Interesting fact about Zewdie: She has been to over six different countries, including England, Germany, Italy, Senegal, South Africa and Thailand (four times).

Bojana Jankova is a third year student from Macedonia with a major in public relations and minors in Spanish and business. Her goal as a Cabinet Member is to raise campus awareness of the senate and educate students about the role of Senate as an intermediator between the student body and the administration. Her goal is to raise money that will go towards organizations around the world that help people in need. Invisible Children is one of them, as well as an organization that helps the people who suffer from the famine in Somalia.

Interesting fact about Jankova: She is fluent in three languages: Macedonian, English and Spanish.

Alejandro Rodriguez is new to the Senate and new to the campus. He is a first-year pre-med major from Elkhart. He wants to help make Goshen College a better place by helping students communicate their wants and needs to staff members more easily. Part of his goal this year is to help organize a Dream Act group.

Interesting fact about Rodriguez: He  knows how to play the trumpet, trombone, tuba and baritone.

Rachel Smucker is a Lancaster native and a first-year student at Goshen studying communication, business and graphic design. She has previous experience with student government from her high school years. Smucker enjoys planning events and student activities and would like to do the same for Student Senate this year. She said she has new and fresh ideas to bring to the Senate table and hopes that some of them will be realized in the near future.

Interesting fact about Smucker: In her free time, she likes sewing.