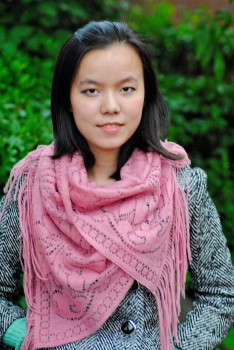 Jing Jin, a senior environmental science and biochemistry double major, hails from the city of Hefei, the capital of Anhui province in China. Anhui is approximately a two hour train ride from Shanghai. Jing first came to the United States in 2006 as high school exchange student. During this time she stayed in Albuquerque, New Mexico.

What is considered to be one of the most significant customs or celebrations in China?

One of the most significant celebrations is the Chinese New Year, or Spring Festival. This festival is based on the lunar calendar and falls around the month of February. Most families gather together, and it is viewed as a way of wrapping up the old and welcoming the new year and new things to come. It has been considered the largest human migration due to the number of people who travel back for the celebrations. I would like to request Goshen College to fly me back for this festival. I am kidding but also kind of serious.

What is your favorite food and drink from China?

I like fish, especially fresh water fish. I also just want to clarify that there is no such thing as Chinese food because different parts of the country have their own specific dishes. For example, since my city, Hefei is close to a water body, we mainly have a fish diet. I also like green tea that is prepared from tea leaves.

What are some of the most popular places to visit in China?

I would say that historical sites are by far the most popular places to visit. Places like the Great Wall of China and the Forbidden City are popular among many tourists. Another popular place to visit in Anhui province, where I reside, is the yellow mountain. This mountain is on the UNESCO list of “Human Natural Heritage protected in the world.”

What would a typical day in China look like for you?

Well, I live in a very urban area so a typical day for me would be visiting some of the malls, attending music events and squeezing in some time to go to the art museum.

[*Editor’s note: It was originally printed that the capital of China was Shanghai, the error has been corrected.]