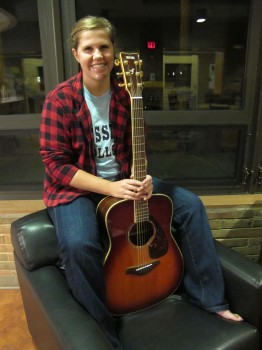 Relax and indulge in the sounds of music: Java Junction has officially started this semester’s live music performance series. Opening the series this Saturday night is Ana Loucks, a junior at Goshen College.

Loucks started playing and composing music four years ago, when she taught herself how to play the guitar in a painful, year-long process. She recalls having blisters on her fingers from playing, but her passion for music kept her learning cord  after cord. “I love it so much,” Loucks said. “I always know I will have a guitar to go back to.”

Loucks wrote her first song, which was inspired by the beauty of Kansas and God’s presence in different parts of the nature, on a cold, snowy day in December. The song-writing process, says Loucks, is “kind of like journaling, but instead of pages, you have music.” Since that day in December, she has written eight other songs.

Her latest single was inspired by the refugees from Africa and Asia she met in Tucson, Ariz. when volunteering for an organization that provided help for these people. As a result of that experience, she wrote “Like a Dove,” which she will perform at Java Junction.

Apart from some of her own verses, her repertoire this Saturday includes songs from Brandi Carlile, Bon Iver, Priscilla Ahn, Patty Griffin and the Weepies. Ashley Fehlberg, another Goshen student, will join Loucks on a couple of the songs.

If you would like to hear her songs and relax this Saturday night, come to Java Junction at 9:30.