Invisible Children seeks partners to end use of child soldiers 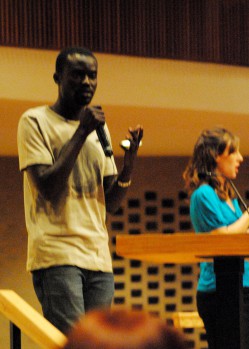 Invisible Children, an organization that seeks to combine film with social action to end the use of child soldiers, shared a story on Monday of how motivation and determination can change the world.

Only eight years ago, three young men with cameras traveled from California to northern Uganda in search of adventure and a story. Their documentary of child soldiers in Uganda, first shown to friends and family and in time to millions of viewers, led to the creation of Invisible Children. The group is now building radio towers across Central Africa and making regular trips to the White House.

“It made me realize how insignificant my life is,” said Mara Swartzentruber, a junior at Goshen College, in response to the convocation. “But [it is] inspiring that it’s possible for young people to make a difference even though we’re in college.”

The members of Invisible Children are working to put themselves out of a job. “Our sole purpose as an organization,” said Abby Finck, an Invisible Children representative, “is ending the conflict and use of child soldiers in Central Africa and apprehending the leader of the Lord’s Resistance Army, Joseph Kony.”

The International Criminal Court has issued a warrant for Kony’s arrest. When he refused to sign the final peace agreement treaty in 2008, he ended hopes of a peaceful disarmament of the Lord’s Resistance Army, an official terrorist group that has abducted, killed and displaced hundreds of people.

Since the failed peace talks, the Lord’s Resistance Army has spread to remote areas of the jungle in the Democratic Republic of Congo, Central African Republic and South Sudan, making it more difficult to apprehend any of the army’s leaders.

These villages are so remote that communication to the surrounding cities takes days, if not weeks, said Opiyo, who works as a mentor for students in Uganda. In order to fix this, Invisible Children is advocating a “Protection Plan.” The plan involves building radio towers for village-to-village communication, creating an online crisis alert application and starting a rehabilitation center in the Congo. The center will be operating by November.

“Though the Lord’s Resistance Army is thought to be at its lowest numbers, they continue to be a major threat as they have begun to attack very remote villages that have no way of defending themselves,” said Amanda Gaebelein, an Invisible Children representative. “So right now, more then anything, we’re working hard to enable those who are most vulnerable to protect themselves and communicate with surrounding villages.”

This past year, Ana Loucks, a junior transfer student from Hesston College, worked as a volunteer coordinator for the refugee placement program at Catholic Community Services in Tucson, Ariz. In Tucson, Loucks saw different, yet equally traumatic effects from conflicts happening in Central Africa.

“Many of the refugees I worked with were from the Congo and were single mothers who had been raped or abused and were caring for the child or children that came from it,” Loucks said.

“It was hard seeing people in the film doing the things I want to do,” Loucks said, “but really motivating to see how successful they’ve been at helping fix the situation over there.”

As a mentor for 30 students, Opiyo said he is a witness to lives being changed through the efforts of fundraising here in the United States.

“These are kids who come from difficult backgrounds,” Opiyo said. “I just try to guide them and counsel them. I help them to forget the past and look to the future. . . . There is hope in education.”

Finck encouraged the student body to not be shy about getting involved. “Start a Frontline fundraising page and link up with each other to fundraise as a whole school, sign up for a TRI subscription or spread the word about our merchandise that’s for sale,” Finck said.

Finck also gave examples of what people have done to raise money. “We get stories from all kinds of people doing whatever they can to raise money and what always seems to work best is determination and creativity,” she said. “One kid is even tweeting Justin Bieber multiple times every day telling him to donate to us.”

Anyone  looking to take on a larger role with Invisible Children at Goshen College should get in touch with the PAX Club, which intends to coordinate a response. “If we believe in something,” said senior Liz Berg, one of the leaders of the club, “we need to do something that costs us.”