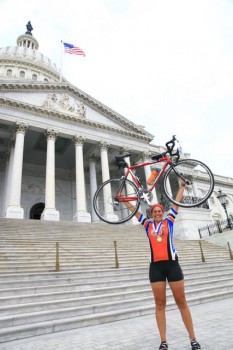 I always have, but I didn’t think I loved my bike enough to ride it across the country.
Like my mom always says, go big or go home. (She doesn’t really say that, but I would like it if she did.)
So I went BIG.
I decided my first bicycle tour would be a 3,600 mile trek across the country, from Seattle, Wash. to Washington, D.C. Originally the journey was a bike trip with an organization attached to it, but the trip soon became more about the organization (which I cared for deeply) and less about the biking.
Biking became a way to both get where we were going and also spread the word of the Fuller Center along with the hope that it brings. Soon the trip was represented by the generous people I was riding with and would meet along the way. We were biking across the country, but that wasn’t the most important thing.
The big deal was that we were helping each other through life, rediscovering our purpose. It was a simple existence; all I had to do was keep pedaling to the next rest stop, and then to the next town.
Some days were harder than others, but all were filled with meaning. I soon found out that the mission of the Fuller Center was more than building and fixing homes for people in need. It was about empowering each individual it came in contact with and finding a way to give hope to each person, including fellow bike riders.
It’s not that the Fuller Center gave me a “fix-all” solution to the world’s problems, or even just my own problems. It merely taught me that this place we live in is the world. Our world. A broken yet somehow beautiful world, a world full of hope. A hope that comes from within us if we just have the courage to dig deep enough.
–By Anne Troyer