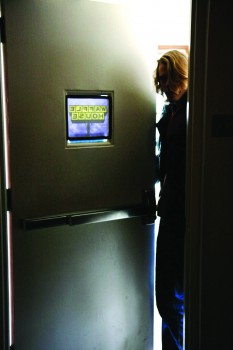 At exactly 6:02 am on Tuesday, Mar. 1, Lucas Nafziger woke to a peculiar noise coming from the 4th floor of Coffman Suites above him. It sounded as if people were moving objects around, suspicious for both the time of day and the lack of present residents due to Spring Break.

Disturbed but not thinking much of it, Nafziger rolled over and went back to sleep. It was only later that morning when walking by the empty spot where his television once stood that he realized something was truly amiss: the apartment had been robbed.

An unknown person or several people are speculated to have entered Coffman Suites Tuesday morning, stealing items from the third and fourth floors. Both the main entrance door and the individual apartment doors were unlocked. The thief did not enter private rooms; shared living areas were the only scenes of the crime.

“I understand that our door was unlocked, and we take responsibility for that,” said Nafziger, “But I trust Goshen students and like to hold an open door policy. The theft shows a sense of invaded space and loss of comfort.”

Coffman 4 Suites were also robbed. Taken from the apartment were three guitars, a huge disappointment to the student-led band Kansas Bible Company that they belonged to.

Mikey Ruth, a guitarist in the band, had a guitar stolen that he has had since he was 14. Though replacements are currently being borrowed, there is a sense of personal loss with the theft.

“What people might not understand is that this is like an identity crisis, and so much more than the loss of money. It’s like wearing someone else’s wardrobe: it just doesn’t feel right,” said Ruth.

Still, the band is optimistic that they will find a way to continue on despite the theft.

“They can take our gear but not our music,” assured Ruth.

The theft comes at a time of increased security on campus following a sexual assault in January. On March 4th, Bill Born, VP of Student Life, sent an email to students and faculty informing that residence halls will remain locked for the rest of the year.

However, students should be reminded that thefts can still occur despite the locked doors.

“This is a reinforcement that it’s better to be safe than sorry. To perpetuate the idea of being responsible, lock your doors whenever you leave. Register your bike and copy down any serial numbers of expensive items you may own,” said Chad Coleman, Resident Director.

Though leads on the robbery have not been made, the theft has been reported to the police and will continue to be evaluated.