Students anticipate a May Term in the Boundary Waters 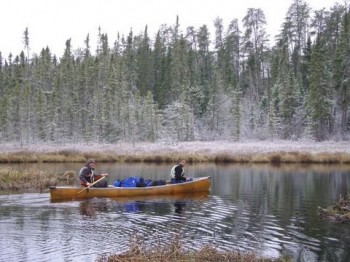 May Term is a time for sun, focused learning, and unusual classes. Many students will be leaving campus—some for SST, some for Arts in London, some for Marine Biology in Florida, some for Spain and Morocco, and some for Minnesota. Yes, Minnesota.

The group of twelve students and two leaders—Val Hershberger, professor of physical education, and Mary Ruth Kamp, a teacher from Orrville, Ohio—will concentrate on wilderness survival skills and teamwork for the shortened May Term class. The first week will focus on orientation at Wilderness Wind, a small Mennonite camp, and the second week will be spent in the wilderness.
This is the eighth time Hershberger has led this class since she introduced it in 2000, and this year’s class is the largest group to date.

“In the past I’ve only taken eight students plus myself, simply because of the limits of the National Forestry Service,” she said, referring to the permits required to camp in the area. Groups of nine are allowed on one permit. Hershberger has slightly changed the format of the class to accommodate the larger group.

“We’ll all work together the first week and go out [in the wilderness] separately in two groups,” she said.

Hershberger will lead one group and Kamp will lead the other. The seven days in the wilderness will provide students with a chance to hone their skills in canoeing, map and compass technique, knot tying, making fires, and working together as a team. The wilderness trip will be a strictly no-technology zone—no cell phones, music players, or even watches.

While students in Goshen will finally be enjoying sunny, warm weather, the Camping and Recreation class has no such guarantee for nice weather.

“Going in May to Northern Minnesota has its challenges,” Hershberger said. “We can have days that are sunny, warm, and 70, and we’ve had nights that go down into the teens.”

The students will also have the opportunity to create their own projects relating their experiences to their majors.

“There’s always a variety of majors and that’s one thing that’s always a lot of fun,” Hershberger said. “I wanted students to be able to incorporate something from their major.” Majors currently represented in the class include English, nursing, ASL, physics, and accounting.

Rachel Mast, a senior art major, first heard about the Camping and Recreation class two years ago when a friend mentioned it.

“It sounded like a great last class to take at Goshen,” Mast said. She is looking forward to this class as a welcome break following her senior art show, a busy class schedule, and graduation.

The unusual format of the class was what attracted Jessie Gotwals, a sophomore nursing major.

“It’s something completely different from my normal academic routine. As students, most of us spend a lot of time inside in classrooms,” Gotwals said. “I think there’s a lot to say for what you can gain from being outside doing more hands-on, experiential learning. It will be a welcome change for me.”

“I’m eager to expand my knowledge of the Boundary Waters, to explore the church’s call to care for creation, and to have a blast out on the water,” said Matthew Helmuth, a sophomore Bible and Religion major. “I’m deathly afraid of the ‘state bird,’ the mosquito.”

The class has already met twice for orientation and to get to know one another, and Hershberger plans to have another two sessions before May Term starts. They will spend the first day of May Term on-campus before driving to Minnesota.

While the class roster is currently full, Hershberger advises interested students to waitlist the class, but to have a backup plan. Like many traveling May Term classes, the roster can be fluid. For first- or second-year students, Camping and Recreation has been offered every two years, so it can be expected to be offered again in May 2013.