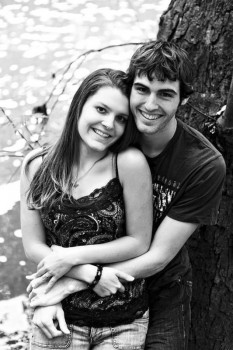 Sam and Vanessa Jones discuss the differences between student life and married life at Goshen College. Sam and Vanessa got married this past summer in South Dakota.

by Sam and Vanessa Jones

A lot of people see us as differently ever since we got married on August 11, 2010. Perhaps rightfully so—married underclassmen are an anomaly at Goshen College. It’s true; our lives are different—entirely different, in fact, than they were a year ago. Last year, we lived in the dorms, ate at the Rott, and stayed up late on school nights socializing in the connectors. We were your standard GC freshman.

A lot has changed since then.

Now, instead of returning to a dorm room to be greeted by a roommate, we go home every night to the person we intend to spend the rest of our lives with. Instead of the Rott and late night conversations in the connectors, we’re eating homemade green bean casserole while discussing the water bill and whose turn it is to do the dishes. Some call it domestication, some call it misery, others call it bliss—whatever you want to call it, we made the decision to go in the direction our relationship was growing—a decision we must choose to make again and again, every day.

With our decision came new perspectives. Whether or not we want to admit it, since last August, we now see the world through a shifted lens. What we see more than anything, however, is not how different being married has made us, but how very much the same we remain.

It may seem like a stretch, but while we are at a different place in our lives than most college students, we are still college students. We are the same age as our classmates, participating in the same classes and activities, facing many of the same obstacles. Sure, the dating thing is not quite the issue it used to be, but our relationship—like any relationship—has its ups and downs.

Above all, we still desire the close friendships that any college student hopes to build during their time in school. We want to get to know you, whether you’re the same gender or not, and in return, we want you to see us as more than just “married.” No one told us marriage was going to be easy. In fact, when people heard we were planning on getting married, that was the information they often seemed the most interested in sharing. With that in mind, we braced ourselves for the struggles that were to come with a more committed relationship.

What we’re just beginning to understand now, however, is how much of the difficulty in marriage comes from relearning to deal with the relationships outside your partner. For many, particularly at this young age, marriage is a frightening topic that puts up walls they never anticipated. For us, one of the main obstacles of being a young married couple has been learning to tear down those walls and find our place amidst the social world of college.

Rest assured, while marriage can seem intimidating (or even downright scary for some), it is a wonderful thing. Although we are far from experts, we can safely say it is not as out-of-this-world different as it can appear from the outside looking in. We’ve just put one more piece of the puzzle into place by deciding to get married. In many ways, adding that piece has made our life picture more complete. At the same time, though, it has made room for a dozen new pieces. We hope that one of them is yours—and that making a connection with us is not difficult because of the new piece we’ve chosen to add to our lives.