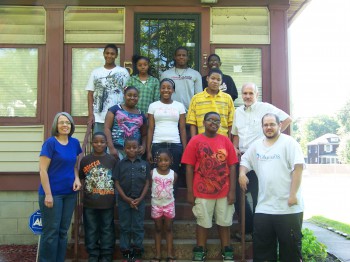 Gary and Gwen Miller with participants in their Urban Faith Works organization in front of the newly renovated center.

Volunteers and students at Urban Faith Works, a small non-profit organization in Gary, IN, received quite the surprise when a ‘documentary’ film crew revealed the truth about their reason for filming there. The crew was actually part of the new ABC reality show Secret Millionaire.

The premise of the show is that a millionaire goes undercover to various organizations that operate in underprivileged areas in the US. By the end of the week, according to the show’s website, the millionaire reveals their identity and donates “hundreds of thousands of dollars of their own money” to the organization.

When the production company contacted Urban Faith Works, an after-school and summer program for students, they told the organization that they wanted to film a documentary. “They said they were looking for grassroots operations trying to work in underprivileged communities,” said Gwen Miller, a 1975 Goshen College graduate who is one of two full-time volunteers at the non-profit.

The organization started out at a Valparaiso, IN, church where volunteers drove to Gary to run a children’s summer program. After two years of driving between Valparaiso and Gary, Gwen Miller, her husband Gary Miller, member of GC class of 1976, and their son Benjamin Miller, director of Urban Faith Works, decided to move to Gary to operate the program full-time.

Students involved at Urban Faith Works spend their time doing homework, receiving tutoring for SATs, and/or learning skills like guitar lessons. “We try to be [the kids’] home away from where they live,” said Gwen Miller.

Due to the organization’s reliance on volunteer labor and donations from various churches, both Mennonite and non-Mennonite, Urban Faith Works limits its size to 30 students. This is an advantage though because volunteers can give proper attention to the kids. “We are seeing students really excelling in school and seeing them get on the honor roll,” said Gwen Miller.

The small size of Urban Faith Works and the private nature of the organization attracted the attention of the ABC production crew and, after confirming the validity of the film crew, the non-profit became part of the show.

On the first day of filming, a much bigger camera crew than was expected arrived. “I thought it’d be one guy with a camera but they were a huge crew,” said Gwen Miller.

Nonetheless, the unexpected amount of people working on the documentary did not raise any suspicions. The only thing Gwen Miller thought was suspicious was that she didn’t know why the production company had chosen them, “We are nobody, we don’t receive state or federal funds, and we only have 30 kids,” said Gwen Miller.

During the week of filming, the secret millionaire was presented as “someone who is the eyes and ears [of the film crew],” said Gwen Miller. “They said he was a stock broker who was trying to see the arena of how it was to be a volunteer.”

Throughout the week, the volunteers juggled interviews and keeping control of the kids who were excited to be in front of cameras.

On the last day of filming, the production crew gathered the volunteers and surprised them with the truth about their show. The volunteers could not believe the news. “If you watch the show’s trailer, I’m the lady in a red shirt with her hand clasped over her mouth,” said Gwen Miller.

Now that ABC is advertising the show, the public is finding out that Urban Faith Works is on the show. “The kids are really excited now because they’re on TV and people are recognizing them on TV,” said Gwen Miller.

Although they are not allowed to talk about what they are planning on doing with the money, Gwen Miller said, “We are an organization that must count on the support of others to keep our doors open, we’ve never had to close or charge a fee to keep kids. God has been so good to us to hand us this provision.”

When asked about the aftermath of the show, Gwen Miller said that she has no idea what will happen, but more kids might want to enroll. Even without advertisements Urban Faith Works had to waitlist children. Doubtless, television publicity will now raise interest for more students. Miller also hopes the show brings more volunteers, but she knows the realities of the work and location make Gary a hard place to be.

It is clear that the Miller family cares deeply about their mission in Gary. Both Gwen and Benjamin Miller’s spouses work full-time and then volunteer at the organization afterwards. “It is life for us,” said Gwen Miller, “[the kids] are like our extended family.”

Even though the experience on the show turned out to be unexpected, Gwen Miller does not focus on the money or publicity that could come from being on television.

Instead her final words were: “My dream remains the same as when I thought it was a documentary.  I hope that people will see the good in people here, see the struggle of what it is like to live in the inner city, that someone might see and that someone might care.  For this we give God all the Glory.  I have been here long enough to know that only Jesus can heal this city.”