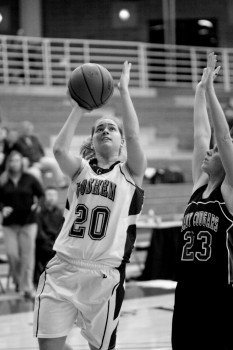 Sophomore Jenna Rusmisel handles the ball during the Lady Maple Leafs’ game against Saint Francis on Wendesday, Feb. 9. The Leafs fell short, ending the game with a score of 84-58.

The Goshen College women’s basketball team lost two conference games this past week against Bethel and Grace College, bringing their total record this season to 6-20 (2-10 in conference play).

Goshen hosted the Bethel College Pilots on Thursday, February 3. Bethel came away with a 77-52 victory, helped by ten 3-pointers and 44 percent shooting from the floor. In comparison, the Maple Leafs only shot 36 percent and made four of 15 from behind the arc. Senior Cassie Grieves put together her fifth double-double of the season, managing 14 points and 10 rebounds.

On Saturday, Goshen traveled to Grace College and tipped off against the 13-12 Lady Lancers. Grace had been victorious in overtime in their previous meeting about a month ago. Although Goshen had a six-point half time lead, Grace came out on top yet again. For both the first and second period, the Maple Leafs shot 37.5 percent from the field, compared to the 23 percent shooting by the Lancers in the first half.

This changed during the start of the second period, as Grace had a run of eight unanswered points to take their first lead of the game at 35-33. With only 2:21 left to play, Goshen retook the lead, 56-54. But they couldn’t hold on, as Grace scored the final nine points of the game, seven of which came from the free throw line, for a 63-56 victory. Seniors Erica Yost and Lindsey Gangloff combined for a total of 30 points and 10 assists.

Goshen has four games scheduled before the conference tournament on Feb. 23rd. The last women’s home game is on Saturday, Feb. 19 at 1 p.m. against Marian University.