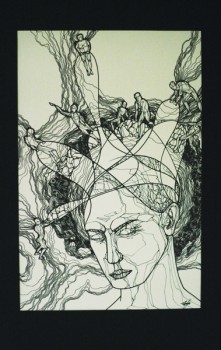 Tolerance. Goshen College Art Club’s current art show, “Tolerance and the Other” is taking advantage of this word’s ambiguity in order to stimulate students’ various opinions and interpretations. Entrance into the art show was open to all students with the encouragement that pieces be inspired by “tolerance” and its connotations. The show has been running since Nov. 19 and will continue until Dec. 6 in the basement of the Good Library.

Senior art major and leader of GC Art Club. Jordan Kauffman, began plans for a student art show this past summer. After approaching Professor of Art Randy Horst, discussion for a theme quickly ensued. Both Horst and Kauffman agreed that a theme based on a social or political issue would challenge students to become immersed in concerns that aren’t commonly addressed. “Personally I have always wanted to create a piece of art that deals with a political or social issue and from conversations with other students, I realized they felt the same way,” said Kauffman. The subject of tolerance was chosen in order to give student artists more freedom to be creative within a broad topic.

Many students took advantage of the opportunity to explore what tolerance means to them.  Some artists chose to focus on broad, large-scale subjects like war and civil movements. Others chose to portray the issue as a more domestic problem, focusing on interpersonal or relational problems relating to tolerance. Jess Sprunger, a first-year art major, sees tolerance as the act of accepting people despite differences.  She communicated that view through a pair of necklaces entitled “As We Are”  that she entered into the show. “Tolerance is making space for other people’s viewpoints. (My piece) represented the issue of struggling to see people for who they really are,” said Sprunger.

The GC Art Club and its sponsors in the art department are tentatively planning on making the show an annual event, with themes changing from year to year. “The hope is that the fall student show will continue to push students to deal with issues that students don’t always have the opportunity to deal with in creative and artistic ways,” said Kauffman.